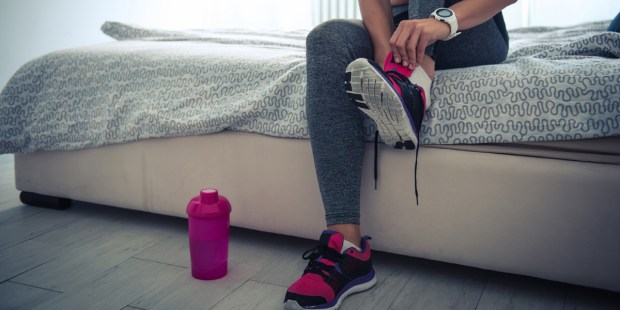 There are simple strategies we can use to overcome this tendency.

I was planning to get up early and work out this morning, but when my alarm went off I decided to go back to sleep. After all, it’s my day off and I knew I’d have time to work out later.

After I got the kids to school I considered going to work out, but it was raining and I had some other work that needed to be done. I knew I’d have time to work out later.

At lunchtime, I considered working out before I ate … but I was hungry and it was still raining, and … well … I’d have time later.

I bet you can guess where this is going. Later never came, and I didn’t work out at all today. That happens to me a few times a month at least, and even though I know by now that skipping my morning workout to do it “later” is equivalent to skipping it entirely, I still sometimes talk myself into hitting snooze. To be honest, it doesn’t take a lot of convincing — it’s shockingly easy to let myself skip a workout, despite the fact that working out is literally my job. But it’s not because I’m lazy or have no willpower. According to Elite Daily, new research has found that the human brain has evolved to be innately drawn toward a sedentary lifestyle:

The study, which was carried out by researchers from the University of British Columbia, found that, despite our best intentions, we human beings are, sadly, becoming more and more inactive over time, according to ScienceDaily … Matthieu Boisgontier, senior author of the study, said in a statement:

“Conserving energy has been essential for humans’ survival, as it allowed us to be more efficient in searching for food and shelter, competing for sexual partners, and avoiding predators. The failure of public policies to counteract the pandemic of physical inactivity may be due to brain processes that have been developed and reinforced across evolution … We knew from previous studies that people are faster at avoiding sedentary behaviors and moving toward active behaviors. The exciting novelty of our study is that it shows this faster avoidance of physical inactivity comes at a cost — and that is an increased involvement of brain resources. These results suggest that our brain is innately attracted to sedentary behaviors.”

From an evolutionary standpoint, this totally makes sense. Energy conservation was hugely important to our hunter-gatherer ancestors, because a lack of necessary energy could literally mean the difference between life and death. We humans are nothing if not adaptors, so it’s completely plausible that prioritizing energy conservation became ingrained as a means of survival.

Unfortunately, in our modern, sedentary world this innate attraction is far more likely to lower our chances of survival than raise them. So how can we overcome our brain’s tendency to sabotage our efforts to get moving?

There are a number of strategies I use, both personally and with my clients. The first (and most important) thing to understand is that if you want to change your lifestyle, you must first change your mindset. If you think of exercise as a chore or a punishment, you’ll never stick with it. So start by finding some activity you enjoy — stop wasting your time running if you hate it! Go take a spin class, a dance class, a kickboxing class — try anything and everything until you find something that you genuinely think is fun.

Second, think short-term instead of long-term. Our brains don’t respond as well to long-term, distant rewards as they do to instant gratification, so find a reason to exercise today that will make this day better. Losing 40 pounds in a year isn’t gonna get you out of bed at 5 a.m., but knowing that your busy day will go smoother because you will be happier and less stressed from exercise-induced endorphin flow just might.

Third, find your “why.” Make physical activity about something more than physical activity. When we tie exercise to a purpose — whether that’s training for a triathalon or saying a morning Rosary during a run — it becomes more meaningful and rewarding. It gives us one more reason to overcome our brain’s inclination to sit still, and one more reward when we do. It also helps us to remember that everything we do in life, from how much we move to the words we speak, has effects that reach far beyond ourselves.

My “why” is my mental health — daily exercise gives me mental resilience and emotional stability, which is a blessing for my family. So the next time I’m tempted to hit snooze, I’ll remind myself that by getting up and working out, I’m giving myself and my family the gift of peace. And that is definitely worth losing an hour of sleep!

Read more:
3 Ingenious ways to combine exercise and prayer, and find time for both