The 9 oldest images of Mary

A recent academic theory dates the oldest image to the 2nd century.

As summarized in a recent article, the Old and New Testament provide many descriptions of the words and actions of Jesus but none about his looks. That’s why painters and icon-makers relied mostly on artistic canon, rather than realism, when they had to portray the Messiah in icons or frescoes. The same principle goes for Mary, as the scriptures do not provide many details about her appearance either.

But by looking at the earliest depictions of the Blessed Mother, we can infer a lot about the main character traits that artists wanted to stress —from nurturing and motherly love to obedience to God—and about the different artistic styles developed by Christian communities during the first nine centuries of Christianity.

Take a look at these nine early images of Our Lady: 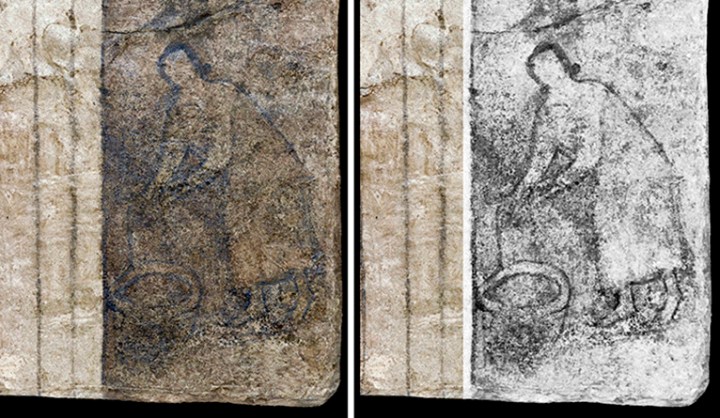 1. Dura-Europos Church, Syria, 2nd century
Discovered in the 1920s by a team of archaeologists from Yale, the Dura-Europos Church in modern day-Syria is considered to be the earliest Christian church we currently know of. The team was able to recover its ancient artworks, dating back to the 2nd and 3rd centuries, including the depiction of a woman leaning over a well, which for a long time was considered to be a representation of the Samaritan woman who speaks with Jesus beside Jacob’s well as recounted by John (4:1-42). But a recent theory proposed by Michael Peppard, an Associate Professor of Theology at Fordham University, has rejected this interpretation, arguing that the painting is actually a depiction of the Annunciation, when angel Gabriel announced to Mary that she would conceive and give birth to Jesus. Peppard points out that in written descriptions of the Annunciation found in 2nd-century biographies of Mary, Gabriel reaches her as she is drawing water with a pitcher, much as the Dura-Europos image shows and in line with Byzantine-era images of the scene. Further study of the image also revealed details that are invisible to the naked eye, such as two lines reaching the woman’s torso, that suggest the depiction of an incarnation. Based on such evidence, the Dura-Europos painting can be considered the first ever portrait of the Holy Mother.