New program helps people with disabilities practice being in airports 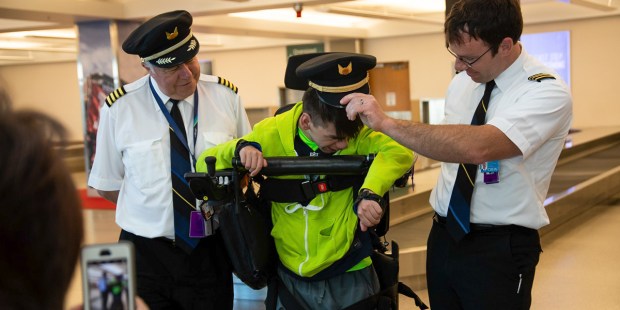 “Wings for Autism” is a life-changing success for many families.

For these individuals, the whole process of flying can seem downright impossible. Jon Meyers, executive director of the The Arc of Arizona, says, “The sensory ‘overload’ of an airport environment, the rapid changes in physical and mental activity, and the unfamiliarity of enclosed spaces can all highly discomforting for people with intellectual and developmental disabilities (I/DD).”

The Wings for Autism event in Phoenix, sponsored by The Arc, Southwest Airlines, American Airlines, Sky Harbor Airport and others, is designed to alleviate some of the extra suffering that people with these disabilities experience while traveling.

According to Meyers, the event serves as an “airport ‘rehearsal’ specially designed for individuals with autism spectrum disorders and people with other intellectual/developmental disabilities, their families, and aviation professionals.” The event allows these individuals time and space to practice the entire experience of flying, without the added pressure of missing a flight.”

The participants and their families were issued boarding passes at check-in, and admitted through security. Then, they headed toward the runway, waited in line to board the plane and finally, made their way to their seats. The pilots and flight crew then taxied the runway and gave the participants an actual ride, stopping just short of actually taking off!

The goal of the event is to empower families who may have previously been unable to fly due to the extra challenges that living with ASD and other disabilities bring. For one family, their daughter’s fear and anxiety of flying has kept them off airplanes for over seven years.

Jenny Mullins, who works at a non-profit and is mom to 9-year-old Elliana, who has autism, told me just how special the event was for her family. “There were literally more volunteers than there were children participating. Seeing these friendly, welcoming faces throughout the airport who were all there to support children with autism, brought tears to my eyes. When your child struggles with the sensory issues that come with autism, you can often feel misunderstood by others. But seeing these amazing adults who wanted to support our family was such an amazing encouragement to us and the other families that participated.”

And while the families and participants benefit from the travel trial, the event is just as much for the airport staff to familiarize themselves with people who are a part of the I/DD Community—through this event they’re able to improve their skills in meeting this population’s distinct travel needs and better serve each individual and their families.

“One of the TSA agents told me that wanted to serve children at this event so he could learn how to better interact with people on the autism spectrum,”Jenny Mullins explained. The captain even let Elliana sit in the cockpit, and she couldn’t stop smiling.

Currently, there are only a handful of other airports where the Wings for Autism event takes place, but the need for these events is great. If you’re interested in bringing this amazing event to your local airport, Meyers says you can start by contacting their local chapter of The Arc or local airport community relations office. Kerry Mauger, who oversees the Wings for Autism program nationwide for The Arc of the United States can also help. Contact her at mauger@thearc.org.

Meanwhile, Jenny and husband Jim Mullins, who serves as a local pastor in the Phoenix area, have planned their first family airline trip in 7 years and couldn’t be more excited to fly with their daughter. And rather than being anxious about the trip, Elliana can’t wait to fly again!

Jenny hopes more of these events will begin popping up around the country, saying “Events like these are so huge in the lives of families that have children with autism. It is an incredible feeling to feel such love and acceptance as a family.”