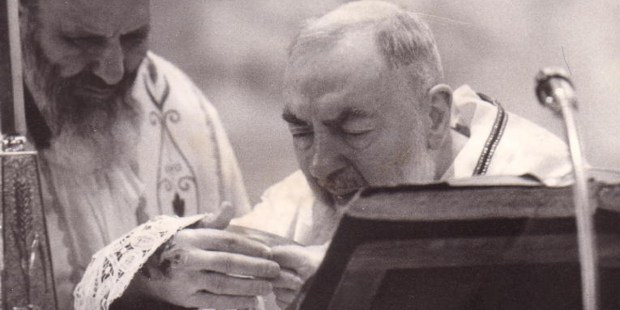 Witnesses attest to seeing a vision of the Baby Jesus in the arms of Padre Pio.

St. Padre Pio loved Christmas. He held a special devotion to the Baby Jesus ever since he was a child.

According to Capuchin priest Fr. Joseph Mary Elder, “At his home in Pietrelcina, he prepared the crib himself. He would often begin working on it as early as October. While pasturing the family’s sheep with friends, he would search for clay to use to fashion the small statues of shepherds, sheep, and the magi. He took particular care in crafting the infant Jesus, making and re-making it continually until he felt he had it just right.”

This devotion remained with him during his entire life. In a letter to spiritual daughter, he wrote, “When the Holy Novena begins in honor of the Baby Jesus, it felt as though my spirit were being born again to a new life. I felt as though my heart were too small to embrace all our heavenly blessings.”

Midnight Mass in particular was a joyous celebration for Padre Pio, who celebrated it every year, taking many hours to carefully celebrate the Holy Mass. His soul was lifted up to God with great joy, a joy that others could easy see.

Additionally, witnesses have recounted how they would see Padre Pio holding the Baby Jesus. This was not a porcelain statue, but the Baby Jesus himself in a miraculous vision.

We were reciting the rosary while waiting for the Mass. Padre Pio was praying with us. All of a sudden, in an aura of light, I saw the Baby Jesus appear in his arms. Padre Pio was transfigured, his eyes gazing upon the glowing child in his arms, his face transformed by an astonished smile. When the vision disappeared, Padre Pio realized from the way I was looking at him that I had seen everything. But he drew close to me and told me not to mention it to anyone.

A similar story is told by Fr. Raffaele da Sant’Elia, who lived next to Padre Pio for many years.

I had got up to go to the church for the Midnight Mass of 1924. The corridor was huge and dark, and the only illumination was the flame of a small oil lamp. Through the shadows I could see that Padre Pio, too, was making his way to the church. He had left his room and was making his way slowly along the corridor. I realized he was swathed in a band of light. I took a better look and saw that he had the Baby Jesus in his arms. I just stood there, transfixed, in the doorway of my room, and fell to my knees. Padre Pio passed by, all aglow. He didn’t even notice I was there.

These supernatural events highlight the deep and abiding love of Padre Pio for God. His love was further marked by simplicity and humility, with a heart wide open to receive whatever heavenly graced God had planned for him.

May we too open our hearts to receive the Baby Jesus on Christmas day and let God’s unfathomable love overcome us with Christian joy.