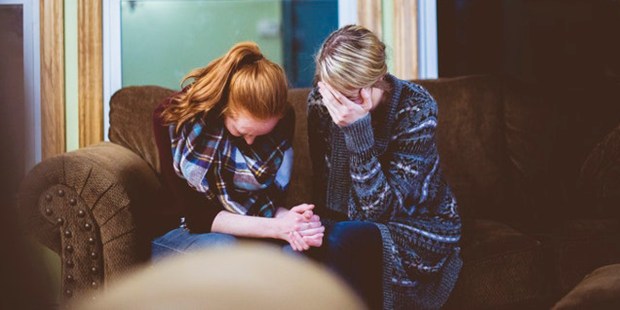 Sometimes it’s not what you say, but what you don’t.

Pregnancy is the blessing we love to talk about — we can’t get enough of baby-names, little pink outfits, and asking about the due date. But miscarriage is the unnamed tragedy that makes us go silent. Suddenly, we don’t know what to say or do because we feel awkward talking about it, we don’t know how to help, or we believe that miscarriage isn’t such a big deal.

Recently, at Epiphany parish where I’m the pastor, we had a Mass to pray for all of our miscarried children. I invited everyone to submit the names of their miscarried babies so we could pray for them by name, expecting maybe a dozen names — instead we had well over 50. Afterwards, a mother told me she hadn’t realized she would feel so much healing and relief from the simple act of remembering the babies she had lost.

The number of affected families is larger than we think. Statistics show that up to one in four pregnancies end in loss. These are staggering numbers, and the worst part is that, in the excitement and joy of a pregnancy, you never think it will happen to you. But then it does.

I talked to Melanie Schwob, a registered nurse who runs a support group for couples who have lost a child in miscarriage. She also works for SHARE, a grief ministry that provides resources for nurses, chaplains, and social workers. Supporting families when they’ve lost a baby is close to her heart because she has experienced it personally. She says, “I thought I understood loss, but until we had lost our own I didn’t realize how hard it is.” She goes on to explain why it’s so important that we support each other in our grief. “People who seek support tend to recover and heal better, not that they ever forget, but they learn to integrate the tragedy into their lives,” she says. Having realized what a great need there is, my question is – how can we help?

Let’s start with what not to do. If your sentence starts with “At least …” then leave it unsaid. For example, don’t say, “At least you can try again,” or, “At least you have your other children.” Instead of rationalizing, the better approach is to listen and encourage the parents to speak about it, always emphasizing that this baby matters.

It’s a simple gesture that goes a long way, a way of taking care of a mother so she can focus on taking care of herself. Physically, pregnancy is demanding and the conditions that lead to a miscarriage make it even harder. Not only must a woman emotionally recover, but she needs to physically recover just as much as a woman who has given birth.

Acknowledge they are parents

Even if the miscarried child was their only pregnancy, that couple is still a mother and a father. Schwob says it’s important to “Validate the child as a precious life and acknowledge the mothers and fathers.”

Be clear it’s not her fault

Many mothers who miscarry feel like a failure. They feel guilt, thinking they could have avoided it somehow if only they’d been more aware of what was happening or taken care of their bodies in a different way. Schwob says, “Pregnant women immediately start planning and their nature is to protect that child. It’s a common thought that they have failed to do their job.” The feeling of guilt is common but it doesn’t make it true. Fathers have a hard time, too, because they cannot “fix” the problem. Help families grapple with guilt and understand that they aren’t failures.

Simply because the baby had a shorter life doesn’t mean mom and dad didn’t love their little one with all their heart. The grief process isn’t shorter and there should be no expectations for the couple to get over it, move on, and forget about the miscarriage. We can help by encouraging them to always remember.

Use the baby’s name

Ask for the baby’s name and use it. Often, people don’t think of giving their child a name, especially if the miscarriage was early in the pregnancy, but Schwob says, “I always encourage the couples to name the children.” A name creates a human connection and brings that baby to life.

There’s a catharsis that comes at a funeral when we see the body and say goodbye. With miscarriage, that isn’t always possible, but it helps to have something similarly tangible to provide closure. Help the family create a memento box to collect an ultrasound picture or any other baby items that have already been collected. Encourage the couple to put up a grave marker if they can.

If you’ve experience a similar loss, consider sharing your story. A miscarriage can be isolating because the mother feels that child in her womb and loves her child while no one else outside the family may have even known she was expecting. She feels that no one knows her experience, so never speaks about it. The first step to healing for both mother and father is knowing they are not alone.

Read more:
What to say to a mom after a miscarriage