Exclusive photos: On exorcisms and excommunications in New York City

Identifying the real victims of the diabolic spirit in our midst.

A cloud of steam billowed up through a manhole cover as a lonely taxi drifted by, the steam vanishing only to reappear a few moments later on this frigid Manhattan morning. The streets were peacefully still and empty, as only those with some pressing purpose would trade the warmth of their apartments for the bitter cold that lurked beyond the threshold of their doorstep.

In spite of the weather, at 7:45 a.m. the giant doors of Old St. Patrick’s Cathedral in lower Manhattan creaked open, welcoming a die-hard group of advocates for life as they gathered for Mass with a special intention of praying for the lives of those affected by the infamous Roe v. Wade decision in 1973. Adding to their fervor was New York’s recent codification of abortion as a “right” in the state’s constitution, allowing for the procedure throughout the full nine months of pregnancy.

At the conclusion of Mass they took to the streets in solidarity to process to Margaret Sanger Square, to endure the arctic temperatures and pray the Rosary. And then it happened. As the group faced the imposing brick building that bears the steel letters spelling “Planned Parenthood,” Fr. Fidelis crossed the street and gently removed a book of prayers, a crucifix, holy water and a confessional stole from his pockets. Donning the stole, he began the prayers of exorcism. Curious Planned Parenthood escorts warily eyed him but kept their distance. 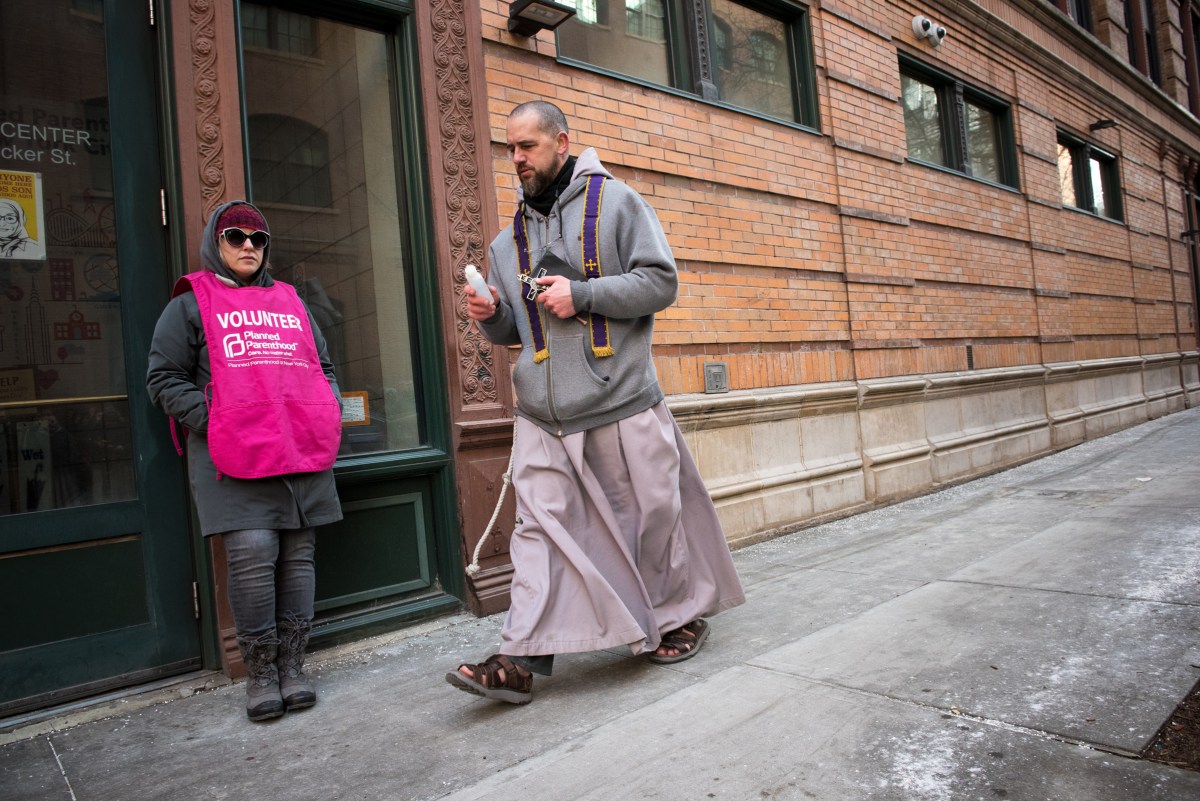 What was at stake were the souls of all of those involved, directly and indirectly, in this scourge of abortion. And then there is the mourning for what’s been lost — lost artists, lost doctors, lost athletes, lost freedom, lost love, lost peace and ultimately, lost souls.

He walked around the building several times, sprinkling holy water while praying that the enemy take flight.

The enemy is not the abortionist, the Planned Parenthood worker, or the pro-abortion politicians. It’s the diabolic that oppresses the truth in their hearts and causes them to mistake wrong for right. Every soul lost is a victim, every unborn child a tragic casualty.

In this spiritual war that rages in our culture it’s every person’s responsibility to pray that this evil can be driven back, so that the light can free those who cannot see due to the darkness. Movements like 40 Days for Life recognized this reality early on, and have organized their outreach around this principle of prayer first. They’ve seen countless conversions, such as in the life of Sue Thayer, a former Planned Parenthood worker who now works for 40 Days for Life. They’ve closed clinics, saved the lives of untold numbers of unborn children, and continue to grow around the nation.

So, excommunications? Above my pay grade.  But exorcisms? Sounds just about right.