Because of its resemblance to Bethlehem, this World Heritage Site has been featured in movies about the life of Christ.

This city of stone is located In a corner of southern Italy. People who have visited Matera say that it resembles Bethlehem, especially at night, when lights illuminate the stone buildings and outcroppings, and from a distance, the mountain looks like a giant Nativity scene.

Several movie directors have had the same thought. Pier Paolo Pasolini filmed part of his Gospel According to Matthew there, Mel Gibson filmed The Passion of the Christ in its streets, and more recently, Cyrus Nowrasteh used it as the setting for The Young Messiah. 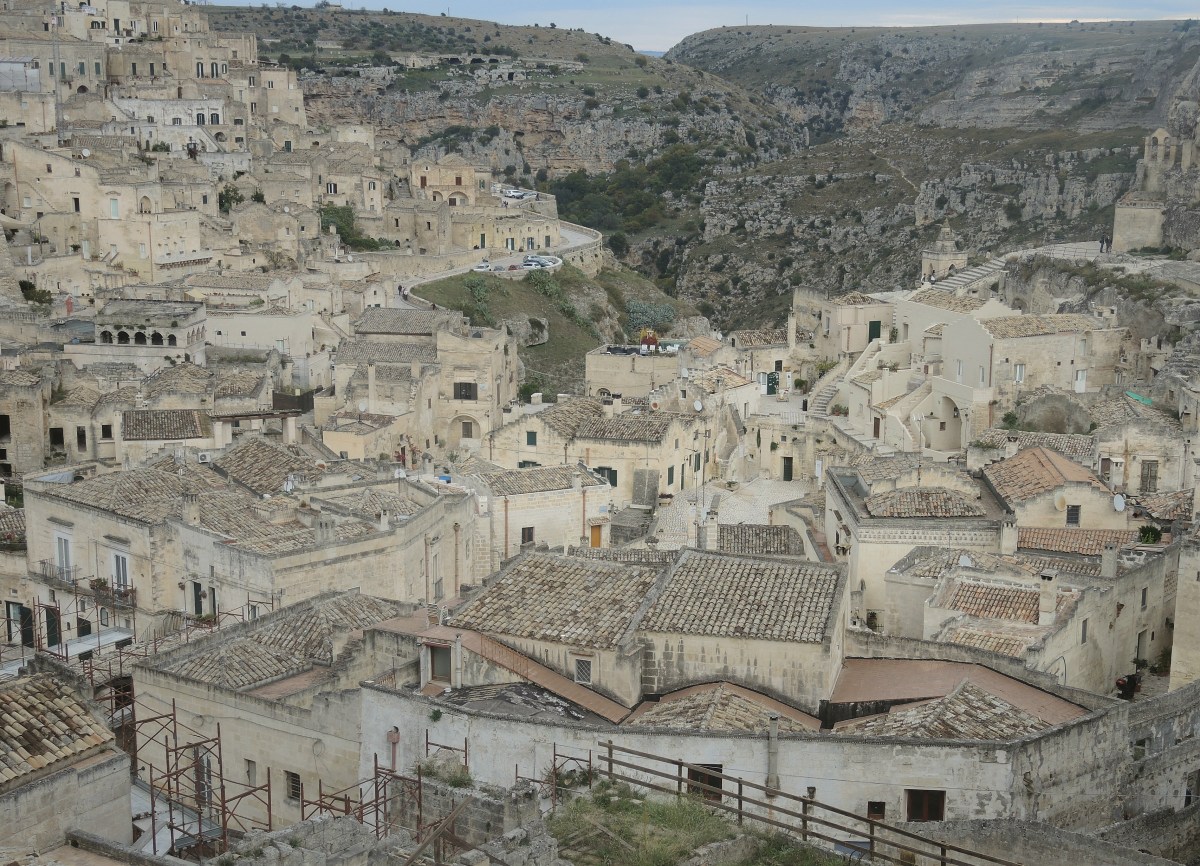 In 2014, Matera was named a cultural capital for Europe for the year 2019, along with the city of Plovdiv in Bulgaria. Even today, many people don’t believe it. In the 1950s, Matera was also in the news, but for a different reason: because of the precarious living conditions of the inhabitants of the so-called Sassi, caves dug out of the mountain, which were even called a “national shame” because of their lack of hygiene.

The inhabitants were forced to leave the caves and to find homes in the modern side of the city. Some refused, others converted their caves into restaurants or hotels, but as the Fodors tourist guide says, “Matera is the only place in the world where people can boast to be still living in the same houses of their ancestors 9,000 years ago.”

This is the reason why the Sassi continue to be the greatest tourist attraction; they were even named world heritage sites by UNESCO in 1993, because they represent a lifestyle that is thousands of years old, as well as representing a balance between human habitation and nature that doesn’t harm the environment. According to the organization’s website, “This is the most outstanding, intact example of a troglodyte settlement in the Mediterranean region, perfectly adapted to its terrain and ecosystem. The first inhabited zone dates from the Paleolithic, while later settlements illustrate a number of significant stages in human history.”

But there are many other places of interest in this Italian city, especially some of a religious character. A group of rupestrian churches, carved out of the rock and decorated with frescoes as old as they are beautiful, is also a world heritage site. The kind of rock found in Matera is called calcarenite, although the people of the town call it “tufo,” and it is characterized precisely by the fact that it is easy to carve out.

The cathedral is located in the highest part of the city. It was built between 1268 and 1270, and has a spectacular view. The church has been dedicated to St. Mary of the Bruna since 1389. A statue of the Virgin is visible in the main entrance, along with Sts. Peter and Paul. Built in an Apulian Romanesque architectural style, one of its highlights is its 170-foot-tall bell tower. The interior is mostly Baroque, although Byzantine-epoch paintings have also been found, such as a fresco of the Last Judgment. The cathedral suffered severe damage when some internal structures collapsed in 2003, but after 13 years of restoration, it opened its doors again in 2016. Not only has it been restored to its full splendor; frescoed crypts that had probably been covered up when the church was remodeled at the beginning of the 16th century were also discovered and are now on view.

Other interesting places include the National Museum of Medieval and Modern Art of Basilicata, and Victoria Square (under which is the Palombaro, an enormous ancient cistern that was used to collect potable water).

This year, they are planning a variety of activities because of the city’s status as cultural capital. Events include guided visits to the most emblematic sites, tours of vineyards and wineries, and the first major study of the history of its stone architecture.

Beyond a doubt, it’s a city that was made to be walked on foot, little by little, enjoying the marvelous landscape, the melancholy of its sunsets, its delicious gastronomy (don’t forget to try its traditional bread and some of its wines), and the ancient and fascinating history carved into its rocky foundations.

Read more:
Spend your summer in an ancient Italian village … and get paid!

Read more:
The Real “Sword in the Stone” Is in a Church in Italy