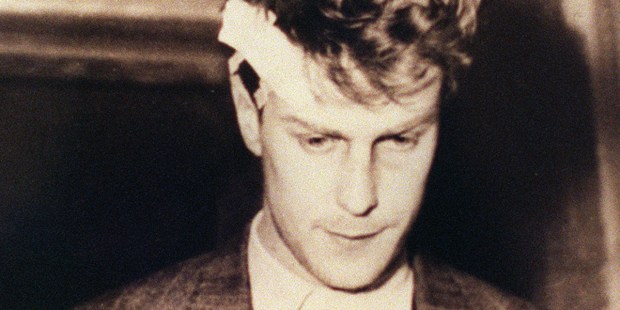 Executed in Paris in 1950, he’s up for canonization. His story has a lesson for this Sunday’s readings.

While the young son was still a long way off, his father caught sight of him, and was filled with compassion. He ran to his son, embraced him and kissed him. His son said to him, “Father, I have sinned against heaven and against you; I no longer deserve to be called your son.”

But his father ordered his servants, “Quickly bring the finest robe and put it on him; put a ring on his finger and sandals on his feet. Take the fattened calf and slaughter it. Then let us celebrate with a feast, because this son of mine was dead, and has come to life again; he was lost, and has been found.” —Luke 15:20-24

On October 1, 1950, a 27-year-old man was executed in Paris for murdering a police officer during a botched robbery. Jacques Fesch, the murderer, was a victim of neglect by his parents and the isolation and boredom that can accompany a life of privilege. He was a rake. He lived a restless life, wandering from relationship to relationship and job to job, eventually finding himself the father of an unwanted child in an unhappy marriage. However, like the “Prodigal Son” in this Sunday’s Gospel, Jacques also came to know the joy and peace of those who receive forgiveness and unmerited, unconditional love.

The three years that Jacques spent in solitary confinement, awaiting execution, were a time of conversion and transformation. He learned what it meant to love his young daughter and his mother. He found a friend and support in the prison chaplain. His cold indifference to his fate and the world around him—as well as his hostile feelings toward God—gave way to a profound sense of sorrow for his crime and serenity rooted in prayer and faith. An unlikely mystic, his prison journals reveal a man whose life was transformed by God’s reconciling and healing love. Today, Jacques Fesch is being considered as a candidate for canonization.

Read more:
He was an opium addict who couldn’t receive the sacraments. But he’s a martyr and a saint

The story of the “Prodigal Son” reminds us that any one of us can wander away from God’s love, restlessly seeking our own path. It doesn’t mean that we’re bad or that we are condemned. In The Return of the Prodigal Son, Henri Nouwen reflected, “Leaving home means ignoring the truth that God has ‘fashioned me in secret, molded me in the depths of the earth and knitted me together in my mother’s womb’ (Psalm 139:13). Leaving home is living as though I do not yet have a home and must look far and wide to find one.” And yet, even as we attempt to “leave home,” setting off on our own to assert our independence, God remains at our side.

The lesson that Jacques Fesch learned during his years of imprisonment is the same as that learned by the younger son in the parable: We come to know ourselves through loss and it is then that we can become free to see who we really are and what we’re really made of.

Read more:
What does it mean to go into the heart? Pope’s preacher explains what it is and how to do it

This gift of self-knowledge is, above all else, a lesson in humility—a simple and unimpeded view of ourselves as we are before God. Humility empowers us to leave behind the illusion of our self-sufficiency and self-love so that we can return home to the Father when we have wandered away. The lesson for us this Sunday is that God is ever-patient and always willing to welcome us home, regardless of what we might have done or of how far we have strayed. This is the reason for our joy on this Laetare Sunday.

When have you “left home” like the Prodigal Son? What or who helped you rediscover the joy of God’s love and mercy?

How does the story of Jacques Fesch challenge your ideas of justice and mercy? Do you believe that there are those beyond God’s forgiveness?

What is the Parable of the Prodigal Son inviting you to do in these final weeks of Lent?

Words of Wisdom: “May your love draw down upon you the mercy of the Lord, and may he let you see that within your soul a saint is sleeping. I shall ask him to make you so open and supple that you will be able to understand and do what he wants you to do. Your life is nothing; it is not even your own. Each time you say ‘I’d like to do this or that,’ you wound Christ, robbing him of what is his. You have to put to death everything within you except the desire to love God. This is not at all hard to do. It is enough to have confidence and to thank the little Jesus for all the potentialities he has placed within you. You are called to holiness, like me, like everyone, don’t forget.” —Jacques Fesch (in a letter to his mother)

Read more:
6 Things the Prodigal Son and his big brother teach us about praying the Our Father