Consecrate yourself to Our Lady of Silence with this prayer 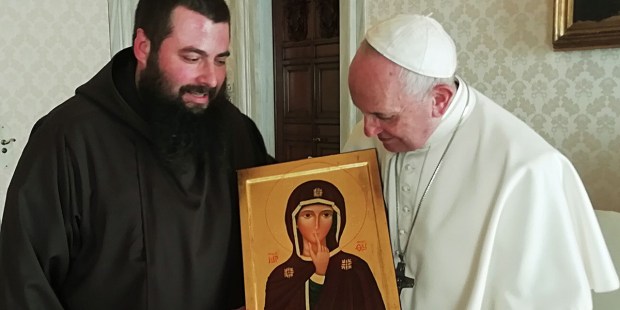 Pope tells friar to “keep going” in promoting devotion to this representation of Mary.

Pope Francis has approved a consecration to Our Lady of Silence, one of his own devotions, Fr. Emiliano Antenucci told Aleteia after a 40-minute private audience with the pope last month. The devotion is “very beautiful,” said the pope, according to the friar.

The Holy Father had a private audience with the Capuchin friar who could be considered the “ambassador” of one of the Marian devotions most beloved by Pope Francis.

Read more:
Is an icon in the elevator the pope uses every day inspiring his prayer?

“There is a great project for Our Lady of Silence in the future, but for now, we must keep silent,” said the friar with a touch of humor, without giving greater details. He said he had received the blessing of the pontiff, who had laid his hands on the kneeling friar’s head, asking that the Holy Spirit accompany him as he continues his mission to battle the dictatorship of noise.

“I told him about my story and my devotion to Our Lady of Silence, and he said, ‘The hand of God is right here,’ and he told me several times, ‘Keep going!’” the friar said. He also described the providential way in which a copy of the icon made it to the pope’s hands through someone who works closely with him.

The original icon of Our Lady of Silence was commissioned by Fr. Antenucci in 2010, and it was was completed after nine months of work by the Benedictine nuns of San Giulio d’Orta in the Italian province of Novara.

He explained that he wasn’t the one who had given a copy of the image to the pope, despite the claims of an Italian newspaper to the contrary. The Capuchin friar said he supposed that it was Divine Providence that had opened the way for him.

“Do you know how many crucifixes and icons the Holy Father receives every day?” he asked, emphasizing his surprise that Pope Francis had paid special attention to this particular representation of the Mother of God.

In fact, the pope has so much devotion to Our Lady of Silence that he had a copy of the icon hung near the elevator of the Apostolic Palace in the Vatican. The image, created in the traditional Byzantine Style, depicts the Virgin lifting a finger to her lips, as if to warn visitors to avoid engaging in gossip and rumors.

On June 15, 2016, the pope blessed the icon of Our Lady of Silence and signed it, moved by the meaning of the image, which invites us to interior silence. He also had a message written on the back of the original icon: “Don’t speak badly of others.”

Read more:
Pope Francis: “Whoever Gossips Is a Terrorist”

“Silence prepares us for the explosion of Easter joy. Silence, the womb of the Word of God, also prepares us to have words that are a gift for others … In a society of noise, silence is a prophecy: it’s a prophecy of the future world,” he said.

It’s been 10 years since Fr. Antenucci wrote his first book on this subject, The Book of Life (2008). It turned out to be the first of a small collection of reflections that would eventually lead to a course on silence, which has been offered in Italian and Spanish, titled “Silence: Silence Speaks.”

He explained that the Christian understanding of silence is different from that of Eastern philosophies and religions. For Christians, silence is considered a form of presence; silence isn’t emptiness, but rather a fullness, being filled with God’s presence.

Silence is an encounter with Jesus, like the experience described by St John of the Cross: It fills us inside and makes it possible for us to us touch heaven. This is quite different from the interior silence achieved using techniques of non-Christian origin, which remain on a human level of silence that isn’t transcendent.

Read more:
Silence can be uncomfortable, but here’s why it’s good for us

Consecration to Our Lady of Silence

Oh Virgin Mary, Mother of Silence,
I consecrate all of my life to you.
Deign to impress upon my heart the Heart of your Son Jesus,
who died and rose again for me.

In reply to the angel’s joyful annunciation, you said, “Fiat”;
at the wedding at Cana, you taught me to do everything the Lord tells me to do;
under the cross, you gave me an example of unity with Jesus
who was obedient to the Father.

Our Lady of Silence, channel of grace,
give me each day the grace of sincere conversion
and of stability in my vocation.

Mary, dew of divine Beauty,
reveal how you are a masterpiece of holiness,
created at the high price of the blood of Christ.

Oh Mary, Cathedral of Silence,
make this prayer resound in my heart:
“Be not afraid, because you are my child,
and you are loved by the heavenly Father.”

Holy Mary, lifeboat of souls, bridge between Heaven and Earth,
guide me, together with the angels and saints,
to build the kingdom of God on Earth,
so that I may live in the constant presence of the Most Holy Trinity
and desire, for others and for myself,
the Eternal peace and joy of the Heavenly Jerusalem.