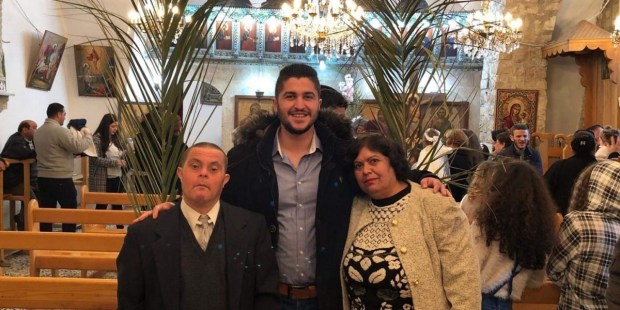 Jad Issa’s son Sader is studying dentistry and is proud of his father’s achievements.

Jad Issa has Down syndrome, but his life isn’t what you might expect. Just ask his wife (who doesn’t have Down syndrome)—or his son, who is studying to be a dentist.

Jad’s story recently made headlines when his son Sader spoke about his father in a video published on Facebook, which led to a series of stories and interviews about this remarkable family (including an article in our Italian edition, which inspired me to write this).

A loving father and a responsible provider

Sader—a strapping young man who enjoys swimming, bodybuilding, studying, and spending time with his friends—lives with his parents in Syria. He’s proud of his father; in the video, he says that even if he could, he’d never want to pick someone else to be his father. “I’m proud of him, the same way he is proud of me,” he says. This feeling is well-founded; Jad is the family’s main breadwinner, and despite the difficulties of his condition, he “tried to do everything to secure a normal life for [me] like any other child,” Sader says. “During my studies, he was the biggest supporter economically, psychologically, and in all respects.”

As Sader explains in the video, the pride is mutual: “One of the things that I am proud of is when he introduces me to a new person for the first time, and he says, ‘My son is a doctor.’ You can see the pride and joy in his eyes. It’s like he’s saying: ‘I have Down syndrome, but I raised my son and did everything to help him become a doctor who treats people. I’m proud of him …’”

Clearly, Jad and his wife were able to provide a more than adequate environment for Sader to grow up healthy, happy, and smart. In Sader’s own words, “A child who grows up in the lap of a person with Down syndrome will have all the love and tenderness that anyone can offer. This will lead up to a person who is emotionally and socially well balanced and is able to achieve anything he wants … When you see a person, perceived by the community as a vulnerable person or a person who is dependent on the community, who is working hard and trying to do everything to secure everything I need as a small kid … This will of course push me to do all I can to be the best person [I can be].”

A husband and a friend

Jad hasn’t only been a good father; according to his son, he’s also a good husband. In his relationship with his wife, “They may disagree sometimes, or not. They have a life full of love, simplicity, and humility in all respects.” In short, Sada says, their relationship is like that of any other couple.

Outside the home, Jad has been working at a local wheat mill for 25 years, and he has good relations with his neighbors and coworkers. “His social relations are simple and pure because he loves everyone and anyone, and in return, all people love and respect him, and treat him like any ordinary person,” Sader explains.

Re-examining what Down syndrome means

All of this should make us think twice. When most people think of Down syndrome, they think of a life full of mental and physical disabilities, of social isolation, of total dependence on other people’s care, of being a burden … In short, a life they consider not worth living. This is so common a view that in many countries children prenatally diagnosed with Down syndrome are aborted.

Yet, this view is profoundly and tragically mistaken in at least two ways:

The first is the assumption that people with Down syndrome are doomed to misery. In reality, people with this condition can have a wide range of abilities. Jad is clearly on the high end of the range of functionality, and the fact that he was able to have a son is highly exceptional. However, in reality there’s no way for us to know ahead of time what a person with Down syndrome—or anybody else, for that matter, with or without disabilities, money, social privilege, etc.—will be able to achieve. Abortion means cutting off any possibilities, ending a life out of fear and misunderstood mercy.

Again, Sader says it best: “As a child who grew up with a father with Down syndrome, I know exactly how pure hearted and loving they are but also that they have ambition and drive and deserve a decent life and do not deserve to be aborted.” In the video, he adds, “For many people, the idea of a woman pregnant with a baby with Down syndrome may be the worst scenario … If my grandmother was convinced of this idea, I wouldn’t be here with you.”

The second way this view is misguided is the idea that the life of a person who isn’t able to function as well as Jad—someone who is truly dependent on others due to disabilities, and may never have the joy of being a husband or father—is a life not worth living. This attitude is profoundly inhuman, because the value of each person isn’t what they can do, but who they are: a human being, deserving of love and care, and of the opportunity to develop whatever possibilities they have, as limited as they may be.

As Christians, we recognize in every human being the image and likeness of God. Sometimes it’s an image that reminds us of Christ during the Transfiguration, radiant with power and goodness; other times, it’s the image of Christ on the cross, wounded, rejected, and dying. Jesus told us (Mt 25:40-45) that what we do to those in need, we do to him. People who are disabled, sick, or disadvantaged, are an opportunity God sends us to learn how to love, and to do so with greater purity of intention.

We need to build a culture where every child who is conceived is accepted and welcomed as a mystery whose future potential only God can foresee; a society in which frightened and confused parents don’t feel they need to face an uncertain future alone, without support or the necessary resources. Our task is to love every child and to help them develop their full potential, as great or as small as that may turn out to be, not to cut their life short because we lack the vision to recognize their value or the generosity to give them a chance.

Read more:
Why we should welcome children with Down Syndrome

Read more:
Meet the man with Down syndrome who retired after a 32-year career