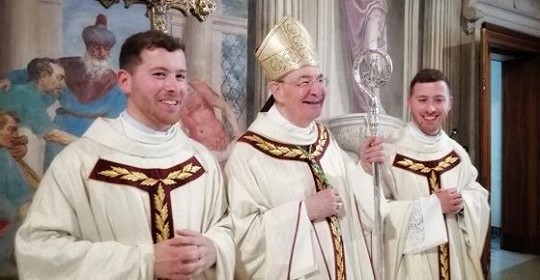 Their decision was “personal, autonomous, and free,” but it led to the same path.

Twin brothers Giacomo and Davide Crespi have always been together, and May 25, 2019, was no different: side by side, along with three other seminary classmates, they received the sacrament of holy orders from their bishop, Gianfranco Agostino Gardin, in the diocese of Treviso, northern Italy.

Fr. Giacomo relates how when they were 11 years old and in 5th grade, the twins came into contact with the vocational ministry of the seminary of Treviso along with other classmates in their catechism class. At the time, neither of the brothers had considered the priesthood. In an interview with Famiglia Cristiana, Fr. Giacomo says, “Certainly, at the age of 11, you don’t ask yourself if you want to become a priest or not. It begins a bit like a new adventure. Then as we grew up, each of us reached the time to start the path of discernment, of moving on to the period of studying theology, and the choice to become priests.”

Although it’s a path they walked together, they both emphasize that each one’s discernment was “personal, autonomous, and free.” Fr. Giacomo explains, “My brother David and I never confronted each other, asking, ‘What are you going to do?’ We simply shared the same path.”

They also acknowledge the fundamental role of the support they received from their parents, Agnese and Giampietro, and their sisters, Irene and Maria. According to the newly ordained priests, “Throughout these years, we always felt that we weren’t alone, that we were accompanied and sustained, especially by our parents. Thanks to their first ‘yes’ and to their witness, we’ve been able to say our own ‘yes’” each step of the way.

That support was very concrete. In an interview with the SIR news agency, their father explains, “[The seminary] was 26 miles away, which was very far for us. I bought a new car so we could visit them every week, and so we could participate in the formation and spirituality events designed for parents, because in a certain sense, the entire family ‘enters’ the seminary.”

Although they entered the seminary program very young, their high school studies were typical of ordinary teens. In Italy, high schoolers already chose a specialization; Giacomo focused on science, and Davide on communication.

Fr. David says that now, at the end of the path that led them to priestly ministry, their “yes” to the Lord has brought them great interior peace:

“Now, I have a feeling of interior peace I’ve never experienced before, thanks to this definitive ‘yes.’ … I know I’m where God has placed me. And I have the fortune of having my brother at my side, who understands perfectly the depth and the importance of everything we are experiencing.”

In his homily during the ordination Mass (quoted by SIR), Bishop Gardin expressed his confidence that the newly ordained priests will be “normal and happy priests. Indeed, in their search for happiness, they’ve discovered that it is found in an intense and fascinating relationship with Jesus, in giving of themselves to help others to get to know Him.”

After their first Mass, concelebrated by the twins at their home parish, Fr. Giacomo thanked his brother in words that reveal the strength of their bond as twin brothers and as priests: “[Thank you,] because for me, you are a brother, my twin, my companion on the road, and my true friend; because if, as [Blessed] Fr. Pino Puglisi said, ‘God loves, but always through someone in particular,’ for me you are one of those people. Thank you, because you’ve walked beside me with discretion and freedom throughout these years. I’ve prayed for you during this, our first Mass. Look to the Lord, the only rock: it is He who lives in you, and it is for Him that you are called to live, with all of your might.”

Read more:
Perpetual vows and ordination in the oncology ward

Read more:
Three Brothers Who Are Priests Show the Power of a Family Dedicated to God