This is one of the oldest depictions of the Sacred Heart 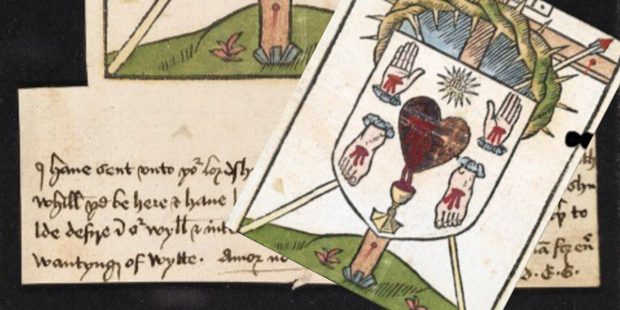 For many centuries, devotion to the Heart of Jesus was tied to the Five Wounds of Christ.

While devotion to the Sacred Heart of Jesus dates back to the first centuries of Christianity, it was never a popular devotion until the 17th century and the private revelations given to St. Margaret Mary Alacoque.

Up until then, with the exceptions of St. Mechtilde (d. 1298) and St. Gertrude (d. 1302), Christians had a stronger devotion to the “Five Wounds of Christ.” This was primarily due to a renewed interest in the Passion of Jesus with the return of many crusaders from the Holy Land. Medieval Christians recognized the depths of Jesus’ love through the various wounds he suffered, which included the “chest” or “side” wound that pierced his heart.

Interestingly enough, according to the Catholic Encyclopedia, “The earliest evidence of a feast in honor of the Wounds of Christ comes from the monastery of Fritzlar, Thuringia, where in the fourteenth century a feast was kept on the Friday after the octave of Corpus Christi … In the fifteenth century it had spread to different countries, to Salisbury (England), Huesca and Jaca (Spain), Vienna, and Tours, and was included in the Breviaries of the Carmelites, Franciscans, Dominicans, and other orders.”

This feast was not universal, but a few centuries later Jesus revealed to St. Margaret Mary Alacoque that he wanted a feast dedicated to his Sacred Heart on the same day as this feast.

Read more:
How the octave of Corpus Christi led to the feast of the Sacred Heart

Before the revelations of St. Margaret Mary, the Sacred Heart was usually depicted in a symbolic manner, along with the other wounds of Jesus Christ. For example, this image from England dates to the years 1490-1500 and represents one of the earliest depictions of the Sacred Heart.

The five wounds are clearly visible, with a simple heart in the center and blood flowing out of it into a chalice. This again makes an obvious connection between the Passion, the Sacred Heart and the gift of the Eucharist.
Later on the Sacred Heart would be depicted in the hands of Jesus, who is offering his heart to the world. This wouldn’t occur until the 17th and 18th century and would become one of the most popular images of Jesus in the world.
Nevertheless, it is important to remember the connection of the Sacred Heart to the wounds of Christ in his Passion, reminding us that the suffering of Jesus was the most sublime expression of his love for humanity.

Read more:
The unique symbolism of the Sacred Heart