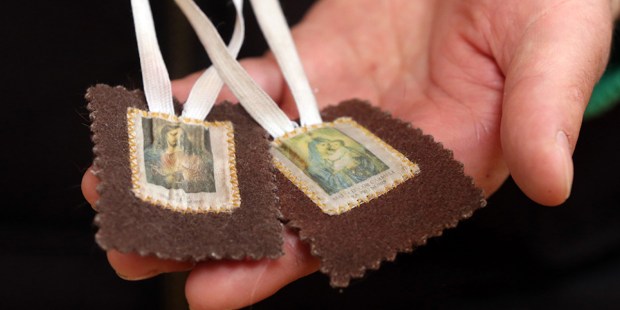 A man shot the priest while celebrating Mass, but something happened that astonished everyone there.

At times God will miraculously save a person from death, and this can happen in any number of ways. He does so when it is within his will and often to highlight the faith of an individual.

One such story can be found in the booklet Garment of Grace, which narrates how a priest was saved by God through the wearing of his Brown Scapular (a ribbon with two squares of brown cloth, imprinted with sacred images, that is worn over the shoulders and is considered a sacramental in the Catholic Church).

One day a French priest on pilgrimage was walking to the local church to celebrate Mass. As he was near the church the priest realized he forgot something.

While putting on his clothes in the morning, the priest had forgotten his Brown Scapular that typically went underneath his clothing.

This disturbed him and he couldn’t think of offering Mass without honoring the Blessed Virgin Mary with the Brown Scapular. However, he would be late for Mass if he went back to his lodging.

The priest decided to run back and put on his scapular, preferring to celebrate Mass with his scapular.

The booklet, Garment of Grace, narrates what happens next.

Later, as he was offering the Holy Sacrifice, a young man approached the altar, pulled out a gun, and shot the priest in the back. To the amazement of all, the priest continued to say the prayers of the Mass as though nothing had occurred. It was at first presumed that the bullet had miraculously missed its target. However, upon examination, the bullet was found ADHERING TO THE LITTLE BROWN SCAPULAR which the priest had so obstinately refused to be without.

The story does not have any other details, such as the name of the priest, date or location, but it is not the first time that someone was saved from a bullet by a holy item they were wearing (such as a World War I soldier who was saved by his Bible).

It highlights the faith of the individual and how their faith literally saved them from danger.

While these stories do not guarantee someone will be saved if they wear something holy, it does reinforce the need to have an authentic faith in God, trusting that he will protect them during their time of need. If we have an authentic trust in God, anything is possible.

Read more:
This is why Satan hates the Brown Scapular

Read more:
How a ship was miraculously saved by God through a Brown Scapular