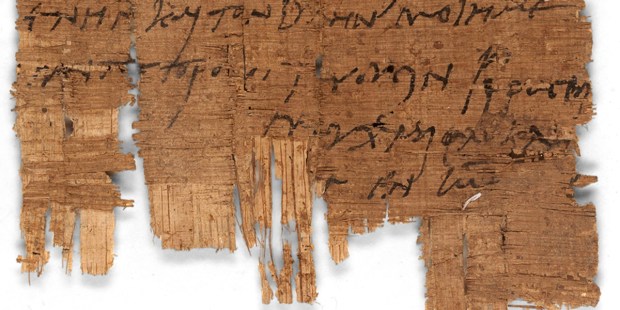 Even a letter so brief and full of pleasantries can teach us much about the ancient world.

Close examination of a 1,700-year-old letter is causing experts to question the notion that early Christians were eccentric recluses with little place in society. The letter, which was dated to about 230 AD, is the oldest discovered Christian document aside from books of the Bible.

The note was scrawled in the hand of a man named Arrianus to his “brother Paulus,” although it is unknown whether they were fraternal or spiritual brothers. Experts think it is likely that “Paulus” was named for the apostle St. Paul, who contributed numerous epistles to the New Testament.

The contents of the note appear to be little more than a salutation and something of a grocery list; however, even such a brief glimpse into the daily life of the ancient world has much to teach us.

Caleb Parke from Fox News spoke with Sabine Huebner, professor of ancient history at the University of Basel in Switzerland, where the letter has been preserved in the Heronius archive for 100 years. Huebner describes some of the important societal factors the letter reveals:

“The letter contains indications that in the early third century, Christians were living outside the cities in the Egyptian hinterland, where they held political leadership positions and did not differ from their pagan environment in their everyday lives.”

Huebner suggests that the use of an abbreviated phrase, “I pray that you fare well ‘in the Lord,'” is known as a nomen sacrum and is distinctly Christian. She said:

“It is an exclusively Christian formula that we are familiar with from New Testament manuscripts.”

Huebner also noted that the name “Paulus” was extremely rare in this era and indicates that it was the Christian practice to name children after the saints as far back as the third century.

Fox News provides the complete transcript of the ancient letter:

“Greetings, my lord, my incomparable brother Paulus. I, Arrianus, salute you, praying that all is as well as possible in your life.

“[Since] Menibios was going to you, I thought it necessary to salute you as well as our lord father. Now, I remind you about the gymnasiarchy, so that we are not troubled here. For Heracleides would be unable to take care of it: he has been named to the city council. Find thus an opportunity that you buy the two [–] arouras.

“But send me the fish liver sauce too, whichever you think is good. Our lady mother is well and salutes you as well as your wives and sweetest children and our brothers and all our people. Salute our brothers [-]genes and Xydes. All our people salute you.

“I pray that you fare well in the Lord.”

[Ed.: the gymnasiarchy was the leadership of the gymnasium, which in Greek-ruled Egypt was the center of both athletic training and local business dealing; an aroura was a unit of land]