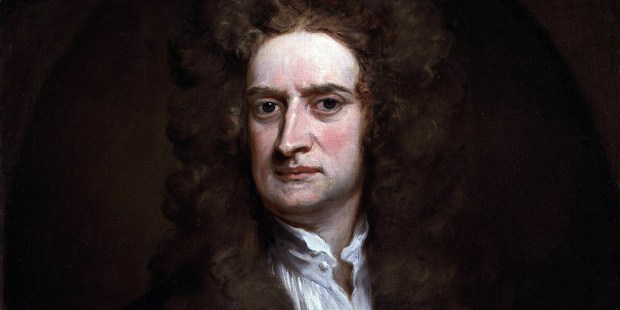 It is often overlooked that the father of modern science also wrote on the topic of theology.

Isaac Newton’s fame as a physicist is cemented in the annals of human history, but while he is afforded the utmost respect as a man of scientific thought, it is often overlooked that the man who realized the Theory of Universal Gravity also wrote extensively on the field of theology. In particular, he was fascinated by metaphysical machinations, the Jewish faith, the structure of the Jewish Temple, and the end of days.

It is not surprising that Newton’s theological writings remain mostly overlooked, as for the majority of the time since his death, they have been in the hands of his beneficiaries, who tried to donate them to the University of Cambridge shortly after his death. However, while the majority of his works were accepted, the scholars had no interest in his musings on the divine.

In 1936, Newton’s beneficiaries put these works up for auction, at which time the majority of these writings came into the possession of Abraham Shalom Yahuda, a biblical scholar who was born in Jerusalem, who had them donated to the National Library of Israel (NLI) after his death, in 1967. It is thanks to the diligent work of Sharon Cohen, from the NLI, that these theological writings are now receiving more attention than ever before.

Cohen explains that while Christianity adopted a Trinitarian view of God — as the Father, Son, and Holy Spirit — Newton found that the Jewish Scriptures present God as a single entity, just the Father. He did not believe that the human body contained a soul and, as such, the only way one could hope to find everlasting life was through the Resurrection.

Cohen notes that these ideas could have meant trouble for Newton. She writes:

The denial of the Holy Trinity and the existence of the eternal soul were considered heresy by the Catholic Church and the Church of England, under whose auspices Newton lived and worked. Therefore, he was forced to keep his views secret, managing to evade the watchful eye of the Church.

Newton was also interested in prophetic symbols, specifically “The Beast,” which was viewed by 17th-century minds as representative of the internal vice of the human mind. Newton, however, believed that “The Beast” was referring to a political body or the single person who leads such an organization.

Cohen explains that Newton learned to read Hebrew to aid in his study of Jewish texts and for his examination of the Jewish Temple. Newton saw the Jewish Temple as a model of the universe. An example of this can be seen in the Temple in Jerusalem, which Newton viewed as a model of the heliocentric solar system, with the centerpiece, the raised altar, representing the sun. It was the Temple in Jerusalem that, Newton believed, would be the “site of Revelation,” where the Apocalypse would begin.

Newton praised the early theologians for their seamless merging of science and religion. He found early theological research that utilized astronomy and physics in its reasoning. Newton, who was always a proponent of a marriage between faith and the sciences, perhaps drew upon this early practice for his own writings.