A priest called the “wrong” number … and God made great things happen. 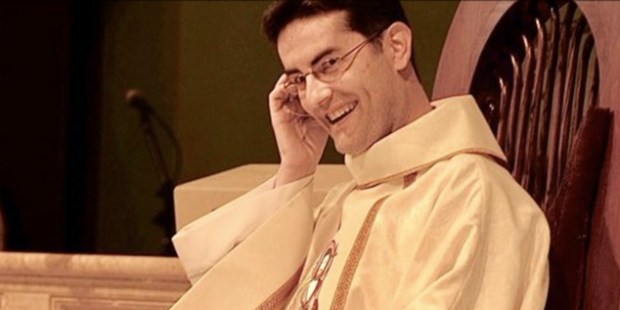 Fr. Goyo Hidalgo is a Catholic priest, originally from Spain, who is now carrying out his priestly ministry at St. Philomena Parish in Carson, California (Archdiocese of Los Angeles).

In June, he experienced one of those “Godincidences” where a mistake helped him reach out to someone in need.

Fr. Goyo had intended to call a parishioner who had left a message, but the person didn’t answer, so his call ended up at voicemail. So, he left this message: “This is Fr. Goyo. I know you needed to talk. I’m here.” He had no idea he hadn’t called the person he’d intended to contact, and he wasn’t surprised when the phone rang two minutes later.

However, the voice on the other end of the line wasn’t the parishioner he thought he’d called, but an unknown man who said, “I wanted to talk to a priest for a long time but I was nervous. How did you know?” As Fr. Goyo explained in a tweet, he didn’t know; he’d simply dialed a wrong number.

I left a message for a parishioner, “this is fr. Goyo. I know you needed to talk. I’m here.”
2min later a call back,
“I wanted to talk to a priest for a long time but I was nervous. How did you know?”

I didn’t know.
I dialed a wrong number.

Thanking God for using my clumsiness

The tweet went viral, and was reported on by Catholic websites around the globe, but with few (if any) new details. In an interview on Relevant Radio on July 11, however, Fr. Goyo went into more depth.

First, he said that when God works through us, it’s a “double whammy,” because God’s grace passes through us and then comes back and affects us as well. This coincidence was meaningful to him because it happened on his last day in his first parish, and the transition was difficult for him. He was tempted not to make the call, because he was going to be “out of there tomorrow” and the parishioner wouldn’t be his responsibility anymore.

He made the call anyway, accidentally dialing an area code for New York instead of California; the person he ended up calling was on the opposite side of the country. He was exactly the person God wanted Fr. Goyo to talk to. “He was praying for a sign, that someone would reach out to him. He needed a lot of spiritual help, and so did I, I guess, in a way, so God took care of both of us at the same time in a very amazing way.”

So, Fr. Goyo says he now has a new friend in New York, whom he also put in contact with a local priest in New York. He says he also sees his dyslexia (which is often the cause of him mixing up phone numbers) in a new light. “My dyslexia was always … my flaw, and I didn’t like it. Now, I love it,” he says, laughing.

Among the many people who replied to the tweet in which Fr. Goyo shared his experience, several told stories of coincidences that helped them to rediscover their faith after being far from the Church for a long time. A woman with the Twitter handle @MulierFortis said, “I came back to the church after an absence of 10 years, after feeling convinced I had to visit a Catholic *church*. It was a Saturday. I had no intention of seeing a priest. I had no idea the church had only just been opened up for Confession & Mass and the priest spotted me …”

I came back to the church after an absence of 10 years, after feeling convinced I had to visit a Catholic *church*. It was a Saturday. I had no intention of seeing a priest. I had no idea the church had only just been opened up for Confession & Mass and the priest spotted me…

Beyond a doubt, God uses ordinary circumstances and coincidences to work extraordinary things. Fr. Goyo told Relevant Radio that he likes to call God a “gentle tornado, because he does amazing things we can’t believe without pushing us to the extreme.” May that wind always blow in our lives!