Mary’s death and assumption: Beautiful thoughts from the saints 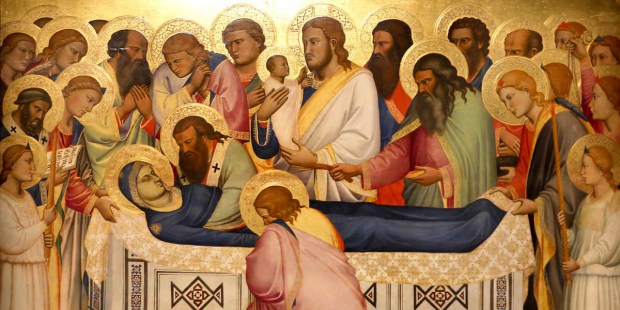 While the Church has no official declaration on whether Mary died before she went to heaven, certain holy people have maintained that she did.

On November 1, 1950, Pope Pius XII solemnly defined in the Apostolic Constitution Munificentissimus Deus the dogma that “the Immaculate Mother of God, the ever-virgin Mary, having completed the course of  her earthly life, was assumed body and soul into heavenly glory.” We know this as the Assumption of the Blessed Virgin Mary, and the celebration of it is a Holy Day of Obligation, celebrated August 15.

This solemn definition does not address the question of whether or not Mary physically died before being taken by God into heaven. All the document says is, “having completed the course of her earthly life.”

Catholics are not bound to believe one way or another if Mary died before the Assumption of her body and soul into heaven.

There is an interesting complement to the feast of the Assumption: Those of the Eastern Churches focus more on the Dormition (Sleep) of the Mother of God, also celebrated on August 15, than on her Assumption into heaven.

The Catechism of the Catholic Church (CCC 966) gives us these words from the Byzantine Liturgy:

In giving birth you kept your virginity; in your Dormition, you did not leave the world, O Mother of God, but were joined to the source of Life. You conceived the living God and, by your prayers, will deliver our souls from death.

Various popes and Church documents refer to these mysteries, some asserting that Mary did experience a natural death, though her body didn’t suffer any decomposition.

Venerable Pope Pius XII refers to Mary’s death at least five times. For example, in the same document where he defined the dogma of the Assumption, he wrote: “the dead body of the Blessed Virgin Mary remained incorrupt, but … she gained a triumph out of death, her heavenly glorification after the example of her only begotten Son, Jesus Christ.”

Pope St. John Paul II also surmised that Mary experienced natural death before her Assumption into Heaven. On June 25, 1997, at a General Audience, he said, “To share in Christ’s Resurrection, Mary had first to share in his death.”

From the sixth century, we have Gregory of Tours speaking about the Dormition, and then some time later, the Assumption:

The course of this life having been completed by Blessed Mary, when now she would be called from the world, all the Apostles came together from their various regions to her house. And when they had heard that she was about to be taken from the world, they kept watch together with her. And behold, the Lord Jesus came with His angels, and taking her soul, He gave it over to angel Michael and withdrew.

At daybreak, however, the Apostles took up her body on a bier and placed it in a tomb; and they guarded it, expecting the Lord to come. And behold, again the Lord stood by them; and the holy body having been received, he commanded that it be taken in a cloud into paradise: where now, rejoined to the soul, [Mary] rejoices with the Lord’s chosen ones, and is the enjoyment of the good of an eternity that will never end.” (Saint Gregory of Tours, Bishop; A. D.595-A.D. 594); Eight Books of Miracles; A.D. 575-593)

One key distinction to keep in mind: The Ascension of Jesus was accomplished through Jesus’ own power as God. The Assumption of the Blessed Mother was done for her by the Power of God, not under her own power.

So no matter what actually transpired so long ago, we know that Our Blessed Mother was taken into heaven, body and soul, passing from this life.

The Catechism of the Catholic Church adds (CCC 967):

By her complete adherence to the Father’s will, to His Son’s redemptive work, and to every prompting of the Holy Spirit, the Virgin Mary is the model of faith and charity. Thus she is a “preeminent and wholly unique member of the Church”; indeed, she is the “exemplary realization” of the Church.