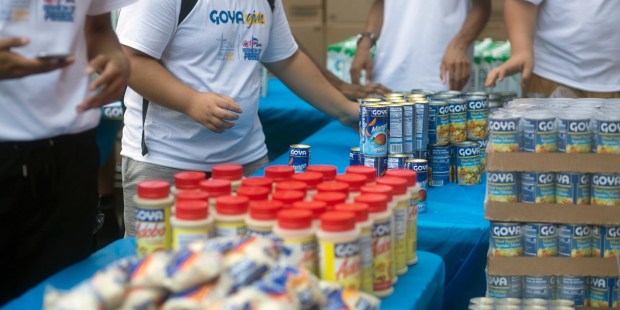 Goya Foods donates hundreds of thousands of pounds of food each year to fulfill its “social responsibility.”

In honor of the National Dominican Day Parade of New York, Goya Foods has donated 10.000 pounds of food to Catholic Charities of New York.

The donation comes as a part of Goya Gives, which the company specializing in prepared Latin and Caribbean foods describes on its website as a global initiative based on a “social responsibility” to “promote culture and benefit overall community wellness.” Over the years, Goya Gives has donated millions of pounds of food to victims of various disasters worldwide, including Hurricane Sandy, Isaac, Harvey, Irene, and Maria, as well as the earthquake in Haiti.

Yahoo News reports that the food will be directed to food pantries in the Bronx, which will be able to provide 16,667 meals, all from this one donation. Beatriz Diaz Taveras, Executive Director of Catholic Charities Community Services, told Yahoo:

“We continue to be grateful for their commitment and that of the Dominican Parade Committee leadership, to highlight, celebrate and provide for one of the many communities our agency is proud to serve.”

Bob Unanue, President of Goya Foods and Board Member of Catholic Charities of New York, commented on Goya’s “social responsibility” to support local communities and to “give back to those less fortunate.” He said:

“To us, it’s not just about providing a monetary donation, but bringing people together to make a positive difference in the lives of others and to celebrate our heritage.”

Goya Foods is the largest Hispanic-owned food company in the United States. Since its establishment in 1936, Goya has maintained a practice of donating annually to worthy causes. The company continues to support over 300 organizations, events, and cultural institutions, as well as local communities.

Goya encourages all its customers to take part in its charitable endeavors by donating to the cause or raising awareness on Social Media with #GoyaGives. For more information on the Goya Gives mission, visit the company website.