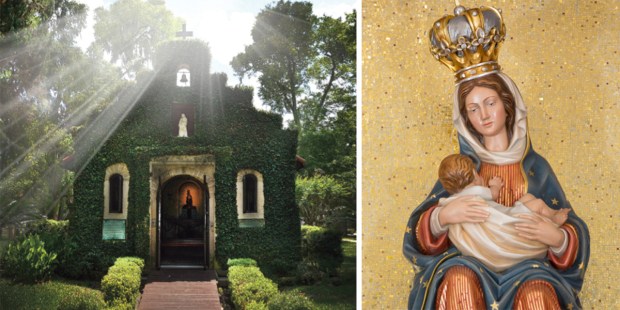 Photos are courtesy of The Shrine of Our Lady of La Leche at Mission Nombre de Dios, St. Augustine, Florida
Share
Print
Jim Graves - published on 08/16/19

Devotion to Nursing Mother of Jesus was instrumental in bringing Native Americans of Florida region to the Faith.

Click here to launch the slideshow
Bishop Felipe Estévez of the Diocese of St. Augustine, Florida, will reinstate the Confraternity of Our Lady of La Leche, a public association of the faithful that promotes devotion to Mary nursing the child Jesus, with a Mass and blessing on Thursday, August 22, at the Shrine of Our Lady of La Leche on the grounds of Mission Nombre de Dios in St. Augustine, Florida.

The devotion came with the Spanish who arrived at the mission site on September 8, 1565, and helped to spread the Catholic faith among the native population.

Read more:
Visit the Oldest Marian Shrine in the United States: The Shrine of Our Lady of the Milk

While the devotion has been popular through the centuries, the Confraternity established to promote it became inactive long ago, prompting the bishop to support efforts to re-establish it.

“This is something the bishop has wanted to do since he first came to St. Augustine in 2011,” said Joanna Stark, executive director of the shrine. “He believes the Confraternity will help support the shrine’s mission of evangelization.”

Seeing Mary as a mother nursing the Child Jesus had a great appeal to the Mocama Indians who inhabited northern Florida when the Spanish arrived, Stark said. More than 200 additional missions were founded through Mission Nombre de Dios and the devotion was spread to other native tribes as well. Stark noted, “Wherever the Faith was brought, the Our Lady of La Leche devotion was what helped tie the many mission communities together.”

Fr. Erlin Yoan Garcia, ICC, rector of the shrine, lamented that while many histories of Mission Nombre de Dios have been written, few mention the importance of the Our Lady of La Leche devotion. The many tourists who visit the region are told of the coming of the Spanish and subsequent colonization, “but they don’t tell about the important role of the Blessed Mother.”

Read more:
Mary’s intercession is especially fertile in her role as Our Lady of the Milk

He hopes the work of the Confraternity of Our Lady of La Leche will change that. Nearly 100 people have expressed interest in participating in the kick-off event, not only Floridians but even those from other countries. Those who join the confraternity will undergo a formation period of six months, and will be asked to maintain an active prayer life, strive for personal holiness, and participate in the life of their parishes. They will also go to monthly meetings and retreats at the shrine.

Fr. Erlin noted, “We will ask our members to consecrate their lives to, and imitate the example of, Our Blessed Mother.”

Father Erlin is from Colombia. In 1995, he entered the Immaculate Conception Religious Community, which was founded in 1984 and is headquartered in Colombia. He was ordained a priest in 2007, and came to the U.S. in 2010. He was assigned as rector of the shrine a year ago. Bishop Estévez gave care of the shrine to his community, Fr. Erlin said, because it was a Marian community and the bishop believed in its motto: “to receive Jesus, to live Jesus and to give Jesus to the world.”

Since his arrival at the shrine, Father Erlin has heard of many wonders worked through the intercession of Our Lady of La Leche. He recalled the case of one woman who had had 18 miscarriages and despaired of her ability to deliver a child.  Father continued, “But she heard about the devotion, came to the shrine and prayed, and not long after returned with a healthy baby in her arms.”

From history to today

The mission and shrine got their start with the landing of the Spanish at St. Augustine in a place they called “La Florida” on September 8, 1565. (September 8 is the feast of Our Lady’s birthday.) The Spanish sought to colonize the region and bring Christianity to its native inhabitants. The mission and shrine were built, with the faithful being ministered to through the years by Jesuit and Franciscan priests.

Notable features of the shrine today include a church and museum, a shrine with an Our Lady of La Leche statue, the Great Cross, a 208-foot stainless steel cross, and a rustic altar in the mission’s “Sacred Acre,” an outdoor altar in approximately the same place as the outdoor altar at the founding Mass celebrated on September 8, 1565.

The mission’s major annual event is a Founder’s Day celebration on the Saturday nearest September 8—this year, Saturday, September 7, 2019—which includes a re-enactment in costume of the founding of the mission with Mass celebrated at the rustic altar. Hurricane Irma in 2017 did extensive damage to the mission and shrine, but much repair work has been done since.