Why does Pope Francis wear a sash? 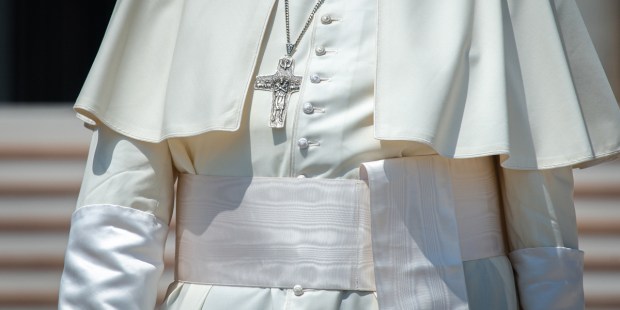 It’s not just to keep his cassock in place, but in fact has deep significance

When the pope is not celebrating Mass, he typically wears a white cassock with a broad white sash around his waist. Why is that?

Read more:
Here are 10 official titles of Pope Francis and their meaning

The sash is technically called a fascia, and has been worn by all Catholic clergy members of the Roman Rite since 1624. While initially it served a practical purpose, the fascia quickly became identified with spiritual symbolism.

According to author James-Charles Noonan, Jr., in his book The Church Visible, “Urban VIII mandated its use as a symbol of one’s commitment to a life devoted to Christ.”

Also, the fascia retains the same symbolism as the cincture (a simple rope) that is worn by priests over their alb (white garment) when celebrating Mass.

The Office for Liturgical Celebrations of the Pope explains the symbolism and the prayer that is recited before putting on the cincture.

Over the alb and around the waist is placed the girdle or cincture, a cord made of wool or other suitable material that is used as a belt…In the symbolism of the liturgical vestments the cincture represents the virtue of self-mastery, which St. Paul also counts among the fruits of the Spirit (cf. Galatians 5:22).

The corresponding prayer, taking its cue from the first Letter of Peter (1:13), says … “Gird me, O Lord, with the cincture of purity, and quench in my heart the fire of concupiscence, that the virtue of continence and chastity may abide in me.”

The pope and many other clergy members wear the fascia as a reminder of their commitment to Christ and their vow of celibacy.

In fact, every vestment the pope wears has great symbolism and is not chosen simply for practical reasons, but to remind him and the faithful of his spiritual duties.

Read more:
This is why bishops wear so many hats