At 83 years old, he was ordained to the priesthood by his own son 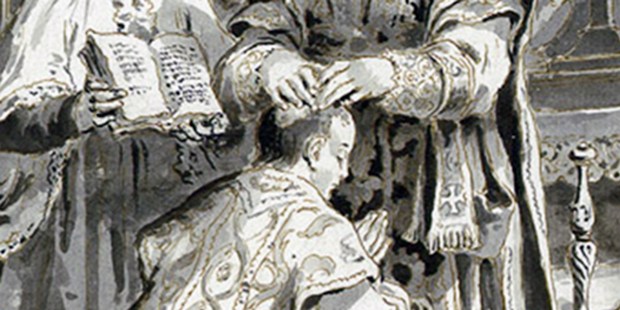 Vicente Melillo and his family have a beautiful story …

Twin brothers being ordained together, twin sisters entering religious life, widowed grandfathers being ordained in the presence of their sons who are also priests … I thought I’d seen it all, until I saw an article in the Portuguese edition of Aleteia that tells a most unusual story: an elderly widower being ordained to the priesthood by his own son, who was a bishop.

The event—which must be one of a kind, at least in recent history—took place in Brazil 51 years ago. Vicente Melillo, an Italian immigrant, was 83 years old when he was ordained by his son, Bishop Aniger Francisco Maria Melillo, in the presence of Vicente’s seven other living children (out of a total of 11), 15 grandchildren, and 8 great-grandchildren.

When we see the facts stripped down to the essentials like this, it’s surprising, but when we learn more about Fr. Vicente’s life before the priesthood, it’s not quite so unexpected. We know of his story from a magazine article that reported on his ordination and from a blog post by Claudinei Pollesel, a historian from Piracicaba, the diocese where Fr. Vicente’s son was the bishop.

Vicente Melillo had migrated from Italy to the city of Campinas in southern Brazil with his parents in 1883, when he was just three months old. He had a successful early career as a journalist writing for local periodicals, and it was in Campinas that he married his wife Regina Morato; they had 11 children together, three of whom died in childhood.

Their surviving sons and daughters adopted a wide range of professions: Vicente de Paulo became a doctor and professor; Santa became a poet, and Regina a writer; Auta became a philosopher, and Pérola, an historian and professor; Irene became a social worker; Zuleika became a religious sister of the Order of the Visitation of Saint Mary; and Aniger became the second bishop of the Diocese of Piracicaba.

It wasn’t by chance that many of their offspring ended up in professions focused on helping other people through teaching, medicine, social work, and religious ministry; they learned the importance of service from their parents.

A life of charity

Vicente was the founder and president of the local Society of St. Vincent de Paul in both Campinas and the state capital city of São Paulo, where he and his family moved around 1920. Although he started working as a lawyer there, he is more remembered for his charitable work. Besides his leadership in the Society of St. Vincent de Paul, in 1931 he founded a home for the elderly, for orphans, and for children with disabilities, on land he himself donated.

In 1935, he went on to found a community—the Buçocaba Neighborhood—for hundreds of elderly people where they could live together and carry out agricultural work to the degree they were able, and receive charitable assistance to the extent they needed it. Later on, he would also establish a residence for poor students who wanted to study in the universities of the state’s capital city but couldn’t afford lodging.

The invitation to the priesthood

Interested as much in the spiritual welfare as in the material well-being of the residents of Buçocaba, in the 1960s Vicente asked the archbishop of São Paulo, Cardinal Agnelo Rossi, to assign a priest for a parish for them. That’s when the cardinal turned to Vicente (a widow at that point) and asked him if he himself would like to become the parish priest of the community. His answer: “I would.”

Given Vicente’s connection with and understanding of the Church, religious life, and the priesthood (remember: he had a daughter who was a religious and a son who was a bishop), his intense spiritual life, and his advanced age, the cardinal obtained a papal dispensation for him from the usual obligatory studies of theology in the seminary.

Thus it was that, in 1966 at the age of 83, Vicente Melillo found himself kneeling before his own son, receiving the sacrament of Holy Orders for the priesthood. He lived three more years, celebrating Mass daily for the people of Buçocaba, until he died on October 3, 1969, after receiving Last Rites from his son the bishop.

The family: A greenhouse of holiness

It’s a truly remarkable story of a life spent largely in service to others. The available sources don’t tell us much about his wife, but judging by what we know about Vicente and his children, she was likely a remarkable woman as well. Named Regina (“Queen”) after the Virgin Mary, the Queen of Heaven, she was both mother and spouse of men who would enter Holy Orders. (Interestingly, her son, Bishop Aniger, bore her name; “Aniger” is “Regina” backwards).