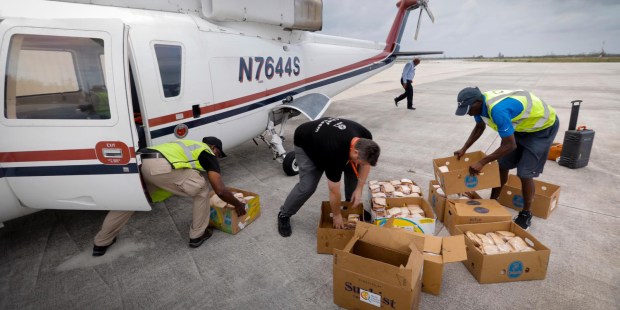 Celebrity Chef José Andrés, his wife, and the team of his NGO World Central Kitchen (WCK) have spent days helping the victims of hurricane Dorian, which struck the Bahamas as well as regions of the southeastern United States, leaving a trail of devastation in its wake. They’ve served more than 100,000 free meals so far to people affected by Dorian.

José Andrés (a 2019 Nobel Peace Prize nominee for his humanitarian work) traveled to the small island of Green Turtle Cay, which has a population of only 550 people. He brought them hot food, along with water, water filters, and plastic tarps to cover the roofs of their houses that were damaged by the devastating hurricane.

At the same time, he prepared a team in North Carolina, where the most damaging tropical storm of 2019 also struck, and sent a ship to Florida to bring first aid to people with damaged homes and who are without electricity or water. WCK has two helicopters and an amphibian vehicle involved in the humanitarian aid efforts.

Hurricane Dorian, which reached category 5, struck the Abacos islands and Grand Bahama, so Andrés also directed his organization to help the people there.

Among the donors to WCK is Lenny Kravitz, who has strong connections to the Bahamas (his mother was Bahamian, and he now lives in the Bahamas). The signer tweeted that he had made a donation to three organizations, including Chef José Andrés’ NGO, and he encouraged others to donate as well.

Let’s help The Bahamas. I donated to National Association of the Bahamas, @COREResponse & @WCKitchen. Details on how to help:

Rihanna, who was born in Barbados, was also deeply moved by the destruction in the region where she was born, and has expressed her intention to help through her Clara Lionel Foundation. “You are in our prayers,” she said in one tweet, “and @ClaraLionelFdn is already figuring out how best we can help!” In another, she said, “It truly breaks my heart to see the complete devastation that #HurricaneDorian is having on the Bahamas!”

You are in our prayers and @ClaraLionelFdn is already figuring out how best we can help! #HurricaneDorain #Bahamas

Although the needs of Hurricane Dorian’s victims are incalculable—and nothing can make up for the dozens of fatalities—the courage of Chef José Andres, who chooses to roll up his sleeves and help the victims, is inspiring others to do the same. He has been tweeting about his own efforts and those of other organizations in the Bahamas, showing the great work of countless people to help those in need.

José Andrés is one of the most famous chefs in the world, thanks in part to his restaurant, Jaleo, in Washington, DC. His wife Tichi, also from Spain, always accompanies him on his humanitarian trips. They’ve been married since 1995, and have three daughters: Carlota, Ines, and Lucía.

In the past, the chef has also helped humanitarian efforts in Haiti and Puerto Rico, among other places.