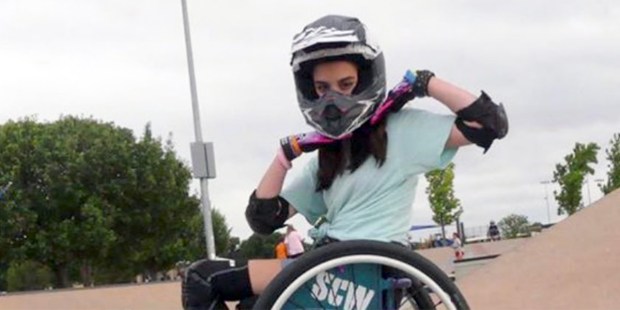 Ella Frech has overcome huge obstacles to become the athlete she is today, with a little help from her family and faith.

At 15 years of age, Ella Frech is turning heads for her prowess on the skate ramps in parks in and around Dallas.

Two years ago she became a world champion in the women’s WCMX for wheelchair skating, beating seasoned athletes in their 20s and 30s, and impressing people with her ability to do death-defying flips and turns. And while all these courageous — or completely crazy — moves show great skill, it’s Frech’s refreshing attitude to her life’s circumstances and her relationship with God that is even more impressive.

As the fourth child in a family of eight kids, Frech was pretty adept with a soccer ball, as well as being an accomplished ballet dancer, before the age of nine. Then, due to the effects of a medication to treat rheumatoid arthritis she’d been suffering with since she was seven, Frech developed Guillain-Barre syndrome, which eventually led to muscle weakness and nerve damage, resulting in her need for a wheelchair, as reported at ESPN.

Despite what must have been a difficult time for Frech and her family, the young skater has now found her niche in a sport that takes both guts and faith that you’ll live to survive the jump. It’s this same courage that Frech’s mom, Rebecca, has applied in trying to provide her athletic daughter with the best possible life.

After a chance meeting with an adaptive athlete, Angel Gonzalez, at a cross-fit competition six years ago, Rebecca asked him for inspiration to help her daughter. Gonzalez’s response was to look to adaptive athletics. As the now-family friend shared with Frech: “There’s always going to be obstacles and not everything is made accessible” for those athletes in a wheelchair, but that has not stopped the former world champion and her mom.

Thanks to Rebecca’s dedication, Frech is able to go to skate parks that are more accessible than others for those in a wheelchair. She trains hard on her upper body to be able to have the strength to pull off those championship moves. What’s also impressive is that even though she’s found a sport she excels in and loves, Frech still has to take time out due the tremendous pain she experiences from flare-ups in her joints — and still she doesn’t seem to complain.

Although she took 2018 off to prepare for her Confirmation, explaining: “I love skating, but God is more important than skating. I can win again another year,” Frech is now preparing for a comeback. Planning to take back her championship title in 2020, she simply states: “Everything hurts but you can sit around complaining about the pain or you can shut up and play.”

You can read the whole ESPN article by Allison Salerno here.

Read more:
Watch out for this toddler in a DIY wheelchair

Read more:
Sports journalist goes from being fired for a careless headline to becoming a priest