Henrietta Maria, the wife of King Charles I, tried to convert as many English people as she could and scandalized the locals by praying for Catholic martyrs.

The media has been giving history lessons to the UK public lately. King Charles I is much in the news for having his head cut off in 1649. There is very little information about his queen-consort, however.

Being the Catholic wife of an English monarch was officially impossible then (this prohibition was not revoked until 2015). The price she paid was never being crowned as Queen Henrietta Maria, as she would not endure a Protestant coronation service. Nor was she even called by her correct name very often. The English preferred to call her Mary, and it is through this Anglicization that one of America’s earliest colonies was created. 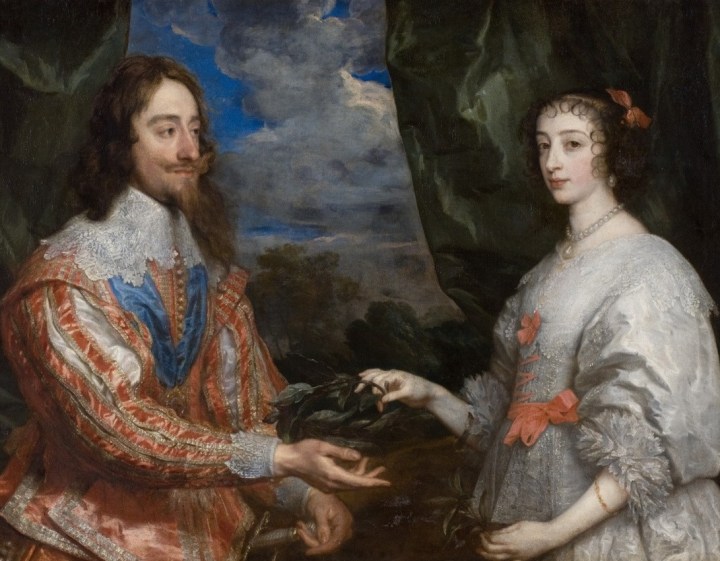 Mary Land, as it was then known, was founded by a charter from King Charles in 1632. His name had already been used so often that he decided to use his wife’s instead. The most prominent tribute to himself is what later became North and South Carolina (from the Latin for Charles). Charleston, West Virginia, honored a different Charles.

Henrietta Maria was at least allowed to keep part of her original name in the Latin version of Maryland: Terra Mariae. The Charter of Mary Land is a useful reminder of the territorial priorities of English monarchs: “Charles by the Grace of God, King of England, Scotland, France, and Ireland” tells us that the king was still claiming the French throne. The New World was a sideshow.

The land was given to Lord Baltimore, as well as the “fish, whales, sturgeons and all other royal fishes.” Immediately after the clause on fishing and mining rights comes the right to “build and found Churches, Chapells and Oratories.” It was this provision that gave most hope to the persecuted Catholics of 17th-century Great Britain and Ireland. Lord Baltimore was a well-known Catholic whose family’s services to two kings had given him room for religious maneuvering. His intentions for Mary Land were more than commercial. He had selected it as a refuge, and it couldn’t have had a better name. Not only did the new province pay indirect tribute to the Mother of God, who was disapproved of in Protestant England, it was also a reference to a very Catholic queen.

Parliament  authorized the destruction of the Catholic chapel in her palace

When Henrietta Maria arrived in England to meet her rather unimpressive husband, she had the comfort of a large retinue of Catholic priests and courtiers. Her father had been the first King of France to change his religion in order to gain the throne. The Huguenot Henry IV is well known for his easy-going approach to kingship, summed up in his statement, “Paris is worth a Mass.”

Henrietta Maria’s devout Catholicism, combined with her father’s betrayal of the Protestant cause, displeased the English. The mob threatened to demolish the Catholic chapel in her palace, one of the very rare cases of such a building being allowed to exist. Where they failed, parliament later authorized the destruction of its contents, including an altarpiece by Rubens.

She tried to convert as many English people as she could

Even worse than Henrietta Maria’s Papist devotion was her ability to convert numerous solidly Protestant Englishmen of the time, including her personal “court dwarf” Sir Jeffrey Hudson. This perfectly formed man of 18 inches in height was considered to be one of the marvels of his day. Sadly, it was his religion that later led to Sir Jeffrey’s arrest and early death in jail.

Throughout the queen’s unhappy time in England she helped Catholics and influenced the king. She tried to convert as many English people as she could and scandalized the locals by praying for Catholic martyrs as they were tortured to death in public. She would undoubtedly have supported Lord Baltimore’s efforts to create a Catholic sanctuary in America. Most of the new colonies were Puritan or Quaker and unwelcoming of Catholics.

Maryland: An experiment in religious toleration

The ecumenical experiment in Maryland did not go smoothly, but at least Catholics could openly practice their religion. With the execution of Charles I and the rise of the Puritans in England, Maryland lost the little religious toleration it had built up. Not until the American Revolution would freedom of religion exist there again.

Back at British imperial headquarters in London, Henrietta Maria was unable to return the country to the “old faith.” She and her husband had the more imminent problem of keeping their kingdom. The queen played a part in bankrupting the country with her taste for expensive clothes and art, helping King Charles to build up the world’s greatest art collection at the time. Fundraising for her king’s war efforts was a skill acquired later. Travel was not, and she never made the arduous journey to the colony that bore her name. England was as far west as she could bear to go.

The queen ended her days after King Charles’ execution in a French convent. Perhaps if she had moved to the kinder climate of Maryland she might not have developed the bronchitis that she blamed on England’s constant damp. The climate and heartbreak eventually killed her 350 years ago. With contemporary resonances, the coup de grace was her dependence on opiates.