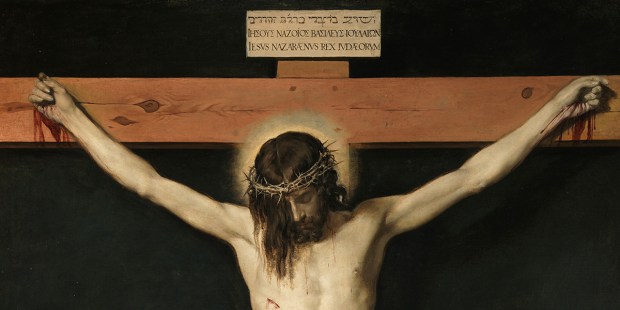 A closer look at the painting’s anatomical detail and use of chiaroscuro sheds light (no pun intended) on the great painter’s creative mind.

Diego Velásquez, the 17th-century Andalusian master, was the lead artist in the court of king Phillip IV, and one of the most prominent painters of the Spanish Golden Age. His importance in the history of art cannot be stressed enough, as his work influenced not only his contemporaries but also some of the developments of later artistic periods, specially in the 19th and 20th centuries. Being knighted in 1658 as a member of the Order of Santiago three years after finishing Las Meninas, and a disciple of the great painter and treatise author Francisco Pacheco, Velásquez was relatively well-versed in not only in artistic but also in biblical and theological matters.

Velásquez’s Crucified Christ might be one of his most famous religious paintings. Some historians claim he learned how to use shocking contrasts of darkness and light from the Italian master Caravaggio (he might have seen his work second-hand, through copies) to add both realism and some amount of theatrical drama to his own paintings. This makes sense, since stylistically speaking (as read in the website of the Museo Del Prado) this piece seems to have been painted shortly after his stay in Italy, in the early 1630s. In fact, the anatomical perfection of the figure of Christ itself follows the neo-Greek ideals of the Renaissance, which Velásquez might have seen with his own eyes in Guido Reni’s work while in Italy.

However, art historians claim there might be yet another explanation for this anatomical perfection: Velásquez might have drawn inspiration from a psalm. At least, indirectly.

Francisco Pacheco, Velásquez’s mentor and father-in-law, was the author of a widely spread treatise, the Arte de la Pintura, a textbook containing detailed and minute instructions for painters who wanted to work on religious iconography. He codified all of the great motifs of baroque religious painting, including how to paint the Holy Trinity, the Immaculate Conception, and, of course, Christ himself, mostly based in Scripture but also in the Tradition and the Magisterium. In his treatise, which the Spanish Inquisition used to oversee artistic production in the domains of the Spanish Empire, Pacheco explicitly wrote:

Christ, Our lord, had no earthly father and thus completely resembled his Mother who, after Him, was the most beautiful creature that God ever created.

This might have been enough direction for Velásquez: indeed, the Tradition has often claimed Christ was indeed the most beautiful of men, so it is only natural Velásquez turned to some of the neo-Greek anatomical beauty canons to work on his Christ. But there might be yet another source justifying Jesus’ alleged physical and supernatural beauty: Psalm 44 (45), which reads “thou art the most beautiful of the sons of men.” In fact, this apparently simple phrase, when joined with classic Greco-Roman studies of harmony and proportion, has modeled Christian iconography to the day, and it is safe to assume Pacheco himself had it in mind when writing his treatise.

But the anatomical and supernatural beauty of the body of Christ is to be found not only in its perfect neo-Greek proportions Velásquez strictly followed, but in the stark contrast between the luminous body of the Christ and the absolute darkness of the scene, which Velásquez surely drew from the Synoptic Gospels: Mark, Matthew, and Luke all claim darkness fell all over the land “from around noon to the ninth hour” (that is, until three in the afternoon) when Jesus was crucified. Velásquez’s use of this radical chiaroscuro, some theorists and art critics have explained, aims at representing also the triumph of the light of Christ’s Resurrection over death and sin, that is, also a supernatural kind of beauty: the ineffable beauty of redemption itself.