Cousins who thought each other had died during the Holocaust, reunite 75 years later 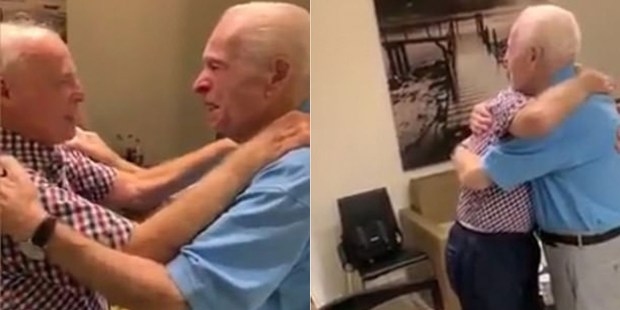 Genealogical studies, DNA, and Facebook all helped bring them together.

Morris Sana, 87 years old, and Simon Mairowitz, 85, were cousins and best friends in their childhood, until the day the Nazis, during World War II, separated them in their home country of Romania.

Morris believed that his beloved cousin had been killed by the Nazis. Simon thought the same about Morris. The cousins had completely lost track of each other in the chaos of World War II, during the persecution of Jews and the Holocaust; according to an article by Nidhi Singh on Good Morning America, the last time they remember seeing each other was in 1943 or 1944.

The GMA article explains that the reunion came about thanks to efforts by Carmela Ofer, Morris Sana’s daughter. She discovered through a cousin she’d contacted on Facebook, Carol Ritter Elbaz, that they had living relatives in England who were part of Mairowitz’s side of the family—a surprise, given that they were listed as victims of the Holocaust at Yad Vashem, the World Holocaust remembrance Center located in Israel. Through Elbaz’ genealogical investigations and a DNA test that Ofer had taken earlier, they confirmed their family connection with Gemma Brown and her mother, Alison O’Callaghan, in England. O’Callaghan is Mairowitz’s daughter.

Once the families had found each other, they made arrangements to meet in Israel. Leetal Ofer, Sana’s granddaughter, shared on Facebook a video of the moment the two cousins met for the first time in 75 years. She comments, “This is one of the most moving things I’ve ever seen and I’d love to share it with you.”

Read more:
Separated at birth, twin sisters end up in the same convent!