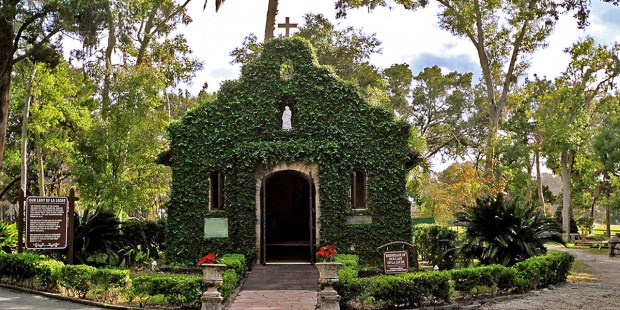 The Shrine of Our lady of La Leche is America’s oldest Marian shrine.

Click here to launch the slideshow
The Shrine of Our Lady of La Leche in St. Augustine, Florida, has been elevated as a National Shrine by the U.S. bishops’ conference, the Catholic News Agency reported.

Founded in 1587, the shrine is at the heart of the oldest European settlement on what in the United States, and is America’s oldest Marian shrine.

It is dedicated to the devotion to Mary as a mother nursing the infant Jesus — a devotion popularized by the Spanish who arrived at the mission site (called La Florida) on September 8, 1565, on the feast day of the Nativity of the Blessed Virgin Mary.

Sent by the Spanish King Philip II, the settlers had a two-fold mission — to secure the land for Spain and to convert the native people to Christianity.

The mission was founded 22 years later by Franciscans, who dedicated a chapel to Our Lady of La Leche in 1609. The shrine is a popular pilgrimage site for pregnant mothers and those hoping to become pregnant, and many attest to wonders worked as a result of Mary’s intercession.

Highlights of the shrine include the Our Lady of La Leche statue, the Great Cross, a 208-foot stainless steel cross, and a rustic altar in the mission’s “Sacred Acre,” an outdoor altar in approximately the same place as the outdoor altar at the shrine’s founding Mass.

Prior to the elevation of the shrine, on August 22 of this year Bishop Felipe Estévez of the Diocese of St. Augustine reinstated the Confraternity of Our Lady of La Leche, which had become inactive over the years.

As Jim Graves reported on the reinstatement in Aleteia the devotion to a nursing Mary was very appealing to the Mocama Indians who inhabited northern Florida in the 16th century.

Read more:
Bishop reinstating Confraternity of Our Lady of La Leche at oldest shrine of USA

Joanna Stark, executive director of the shrine, told Graves that Mission Nombre de Dios, which founded the shrine, led to the founding of another 200 missions which helped spread the devotion to other native tribes.

“Wherever the Faith was brought, the Our Lady of La Leche devotion was what helped tie the many mission communities together,” said Stark.

Stark told Graves that Bishop Estévez believed that the devotion to Our Lady of La Leche is just as attractive today.

“This is something the bishop has wanted to do since he first came to St. Augustine in 2011,” said Stark. “He believes the Confraternity will help support the shrine’s mission of evangelization.”