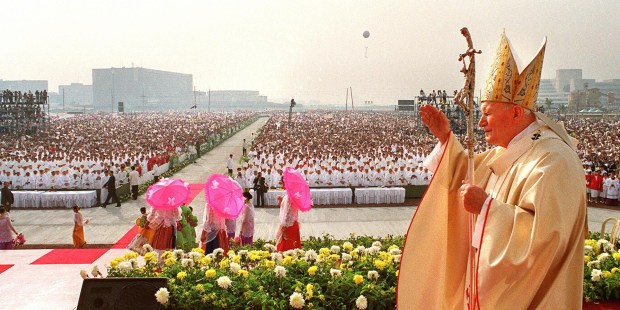 October 22 unites Catholics in their love for Polish Pontiff.

The Our Lady of Veritas Chapel in Quezon City, in the Philippines, invited devotees of John Paul II to present their petitions at the chapel in the lead up to the October 22 feast day.

A Mass on John Paul’s feast day will be offered for all the requests, petitions for healing, and offerings of thanks.

Catholics who visited the chapel to venerate his image received a small image of the Polish Pontiff.

St. John Paul II is much beloved in the Philippines. He visited the nation twice as pontiff, in 1981 and 1995. He might have also visited in 2003 for the World Meeting of Families, but by then his health was quite frail.

However, he also visited before he became Successor of Peter, in 1973 when he was still the relatively-unknown Karol Jozef Cardinal Wojtyla, archbishop of Krakow. It is said that during his brief stay, he enjoyed feasting on the Filipino mangoes!

Of course, the Philippines, with its population of some 80 million Catholics, has great love for all the Successors of Peter. When Pope Francis was there in 2015, it was estimated that 6 million people attended the Mass, the record for the largest papal event ever.

The Our Lady of Veritas Chapel is associated with Radio Veritas, a faith-based AM radio channel.

Our Lady of Veritas is the patroness of those in search of truth and those wanting to live a life in truth.