The haunting beauty of the “Black Hours” medieval prayer books

Because of their unusual color combination and elaborate illumination, most historians think that “Black Books” had an almost mystical status.

Prayer books from the Middle Ages are known for their meticulously designed miniatures and elegant leather covers. But perhaps no one can rival the sophistication of the “Black Hours,” an illuminated prayer book crafted in Bruges, Belgium, in the 15th century. 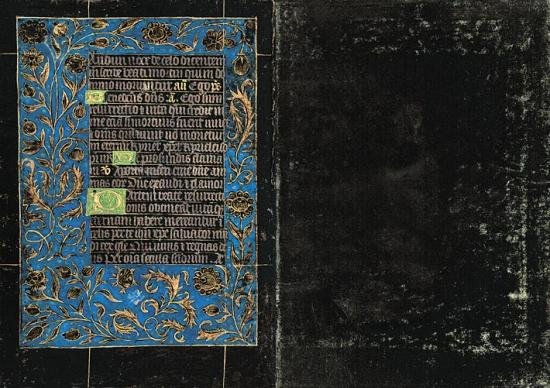 Each of its 121 pages was created by dyeing vellum parchment with iron gall ink, resulting in dark blue and black tones that are very unusual for prayer books. Due to the corrosive nature of iron gall ink, most of the book pages have been corroded. Only the ones made with very thick parchment survived to the present day and are preserved by the Morgan Library and Museum in New York. But the elaborate dyeing process is only part of the wonder of the “Black Hours.” Much of their value lies in the outstanding Late Gothic manuscript illumination technique that featured gold and silver lettering and rare ultramarine pigment, which at the time was worth more than gold.

The book contains the illuminated text of the Hours of the Holy Spirit, the Hours of the Cross, the Mass of the Virgin, the Office of the Dead and the Penitential Psalms. Words of each prayer are spelled out according to the Roman version of hours and divided in rows of fourteen lines.

Miniatures are found on the left of each page and represent episodes from the life of Jesus and the Virgin. Many biblical figures are represented in contemporary medieval costumes like robes and mantles.

One of the most mesmerizing illustrations is found on folio 14v, titled “The Crucifixion,” where Jesus is shown on the cross with multiple wounds and with St. John standing next to him. The two men are surrounded by mourners whose facial expressions convey a deep sense of sadness, an incredible artistic achievement given the small size of the work. Some other figures include hybrid figures typical of medieval imagery, like a half human half fish figure and man with animal legs.

Because of their unusual color combination and elaborate illumination, most historians think that “Black Books” had an almost mystical status and were probably commissioned by the court of Philip the Good, Duke of Burgundy. As for the identity of the artist, no indication is left on the books themselves. However, some art historians think that the “Black Books” may be the work of renowned illuminator Willem Vrelant, famous for crafting angular and linear figures like the ones found in Black Books.

The Black Book is preserved at the Morgan Library and Museum on 225 Madison Ave, New York, open Tuesday to Sunday.