‘Love and Mercy’: New film on St. Faustina and her vision of the Divine Mercy image 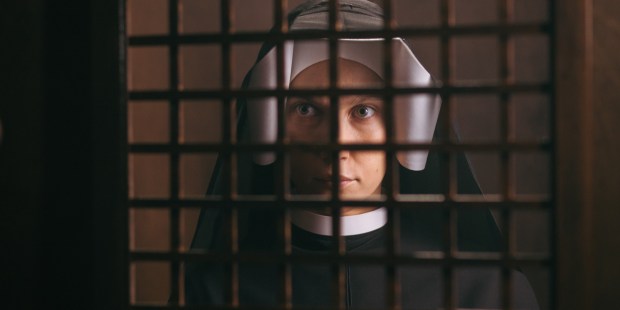 The docudrama, in theaters on December 2, chronicles the Polish nun’s 70-year-long journey from suspected psychotic to saint.

On April 30, 2000, as part of the Jubilee 2000 celebration, Pope John Paul II presided over the canonization of Polish nun Maria Faustyna Kowalska. To the approximate 200,000 joyous pilgrims assembled for the ceremony, the formal recognition of the saintly sister seemed a no-brainer. However, when Faustina (as her name came to be popularly spelled) first reported having visions of Jesus in the early 1930s, the reception wasn’t quite as warm. It’s Faustina’s 70-year-long journey from suspected psychotic to saint that is the subject of the new docudrama, Love and Mercy.

Perhaps because there was already a Polish drama about the life of Faustina released in 1994, director Michael Kondrat has decided to approach the subject matter a little differently than your standard biopic. Rather than begin his film with the birth of the saint, Kondrat instead chooses to open it with the birth of, well, everything. Beginning with the opening lines of the book of Genesis, the movie offers a brief survey of the creation of the world and the life of Jesus. Only then do we come to Faustina herself. It’s an odd choice, but one that becomes clearer later in the film.

After this opening montage, the movie settles into the first half of its story, that of Faustina’s brief life. Well-produced vignettes touch briefly on her childhood and eventual call to enter a convent, one she initially exhibits a bit of resistance to. There’s a wonderfully odd scene in which a teenaged Faustina attends a dance only to come face-to-face with a vision of Jesus, who promptly chastises her for dawdling on her decision.

After that, the movie wastes little time in arriving at 1931, the point at which Faustina first claims to have had her most famous vision, that of Jesus clothed in a white robe, red and white rays emanating from his hands. It is this now famous image of the Lord’s Divine Mercy which Christ requests Faustina have painted for him along with the phrase, “Jesus, I trust in You.”

To say there is immediate skepticism surrounding following Faustina’s private revelation is something of an understatement. Bluntly put, the Church has Faustina examined by priests and psychiatrists alike to ensure the young nun hasn’t flipped her lid. Only after her basic sanity is ensured does the Church appoint Fr. Michael Sopocko to aid Faustina in her mission.

The film scores something of a coup here with information garnered from the newly discovered personal writings of Fr. Sopocko. From these we learn of the long, tortuous process involved in the creation of the original Divine Mercy painting. Of particular interest is that the artist chosen for the task was actually an atheist and a Freemason, situations that would eventually change years later thanks in part to his time spent with the image.

Typically, a film such as this one would end with its subject’s death, but such is not the case here. Though the Church allowed Faustina to proceed with her mission, the issue of the validity of her visions was not settled at the time of her death from tuberculosis in 1938. In fact, as late as 1959, the Vatican issued a notice prohibiting the promotion of the Divine Mercy devotion in any form proposed by Sr. Faustina. It would be another two decades before that ban was lifted.

To cover this period, the last third of the movie consists primarily of interviews with present-day experts and devotees of the Divine Mercy who discuss the struggle to gain acceptance for the authenticity of Faustina’s visions and the devotions that accompanied them. And though it’s hardly necessary, there is also a bit of screen time allotted to the attempt to scientifically connect the image of the Divine Mercy with that on the Shroud of Turin.

The documentary is then not just another retelling of the life of St. Faustina. Rather it tries to connect the devotion to the Divine Mercy into the bigger picture of salvation history, from Genesis until the here and now. And for the most part it succeeds. For those for whom the Divine Mercy holds a special place in their lives, Love and Mercy will be time well spent.

Love and Mercy premiered on October 28. Due to popular demand, Love and Mercy releases in select theaters for second screening on December 2, 2019 and will be available for home viewing soon after.