Children’s drawings will cover the tarpaulins of Notre-Dame 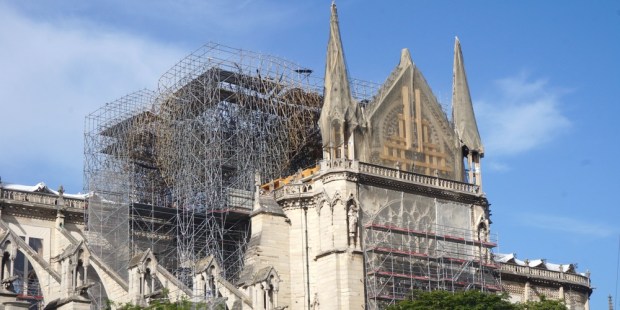 Bishop asks kids from all over the world to play a part in the reconstruction efforts.

On Tuesday, October 15, the Diocese of Paris launched an appeal to children in France and around the world to send drawings of the Cathedral of Notre-Dame. These will then be printed on the tarpaulins covering the cathedral on the first anniversary of the fire, on April 15.

Six months after the fire that partially ravaged Notre-Dame, the Diocese of Paris decided to launch a special call for contributions to the repair — from children.

Archbishop Michel Aupetit of Paris has decided to involve children from France and around the world in the future of Notre-Dame by asking them to send the diocese their most beautiful drawings of the cathedral.

“This invitation is simple,” explained the Vicar General, Bishop Benoist de Sinety, at a press conference on Tuesday, October 15, six months after the fire. “It consists in asking the children to send us drawings representing Notre-Dame as they know or imagine it.”

Read more:
Chaplain who saved Eucharist in Notre Dame gave Benediction before he left the flames

Speaking on behalf of the Archbishop of Paris, Bishop Benoist de Sinety addressed the children as follows: “You should be included in reflecting on Notre-Dame, because tomorrow you will be the adults who will come and restore Notre-Dame.”

These drawings, which must be sent to the Diocese of Paris before March 1, 2020, will then be selected and printed on the tarpaulins covering the Notre-Dame construction site, thus covering the tragedy of the fire with a beautiful colored veil.

The chosen drawings will thus have the opportunity to be visible to the general public on the first anniversary of the fire, on April 15. Those that will not have been selected will most likely be published in a book to be released at the same time, the vicar said. To participate, children are invited to send their drawings to:

Read more:
Notre Dame was minutes away from collapsing when firefighters risked all to save her