Built by Coptic garbage collectors, the church of St. Simon is the largest in the Middle East 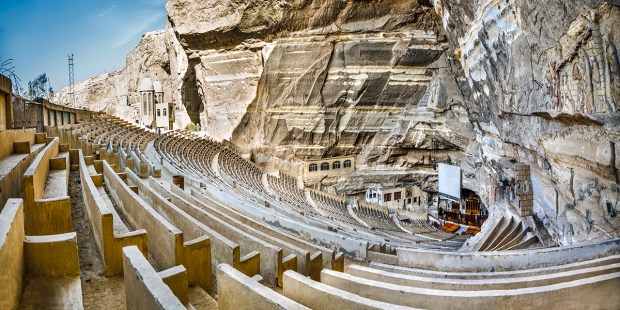 It’s the result of the efforts of a sector of the Coptic Christian community in Egypt.

The Middle East is a transcontinental region, Egypt being the country linking northeastern Africa with Western Asia. Whereas large Christian communities might not be too common in a mostly Muslim country such as Egypt, some Coptic communities have somehow thrived to the point of establishing what is now considered the biggest church in all the region, able to seat 20,000 people: the cave church of the Monastery of St. Simon (“Samaan”) the Tanner, in Cairo.

Simon lived near the end of the 10th century and, like many Coptic Christians in Egypt even today, he earned his living with handicrafts: he was a tanner. However, since this profession also involves some other crafts, he is also referred to as either “the cobbler” or “the shoemaker.” Icons often represent him as a one-eyed man carrying a bag or a jar of water, as he used to tend to the sick and the elderly, bringing them water before going to work.

It was a community of garbage collectors (the “Zabbaleen,” meaning either the “garbage scavengers” or the “garbage collectors”) who built this church in their village, at the base of the Mokkatam cliffs. As read at the website of the Samaan Church, “these trash collectors collect trash from the houses of most sectors of Cairo, and upon returning to their huts, they sort out the trash and classify it. They pick out from the trash all that is fitting for pigs and cattle to eat. As for the paper, glass, plastic, cloth and stuff like that, they are resold to specialized tradesmen, after they are sorted out, and the trash collectors live on what they get from selling them.”

Back in 1969, the Cairo governor decided to move all these garbage collectors to a single settlement. As most of them were Coptic Christians, by 1975 they had already built their first church out of tin and reeds, which was soon destroyed by a fire. Far from discouraged, the garbage collectors decided to build another one. That is how the Monastery of St. Simon was born.

Using a pre-existing cave and the slope that led into it, the Monastery-Church has the capacity to gather 20,000 people. As some other caves have also been dug and built into separate chapels, now the place is a Christian complex in the heart of “garbage city” (that is, the “Zabbaleen” village) in which some of St. Simon’s relics are preserved, including the jar he used to bring water to the sick and the elderly.