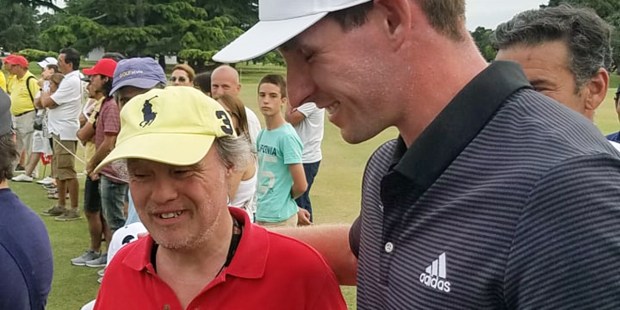 The 25-year-old cared more for a vulnerable fan than his own competition chances.

When Brandon Matthews went to take a putt to secure a place in the British Open, a spectator in the crowd shouted out, causing him to lose his concentration — and his putt. He was naturally upset at potentially missing the cut for the illustrious golf tournament, but when he found out more about the incident, he quickly changed his tune.

A tweet from Sports Center explains the incident: The golfer was told by the tournament director that the man who yelled out had Down syndrome and he’d simply been overwhelmed with emotion. Right away Matthews forgot his own disappointment and thought only of the man.

Having grown up around people with disabilities, the golfer said he had a “soft spot in his heart for it.” He went on to share how terrible he’d felt for even being upset in the first place, and was only focused on how the man was feeling, not wanting him to feel bad, or for others to blame him:

“I didn’t want him to be mad at himself, I wanted to make sure he knew that I wasn’t mad. That’s all I wanted to do.”

So, being the perfect gentleman, Matthews asked to meet up with the fan and gave him a hug a signed glove and a ball. Wanting the man to have a “positive experience” from the whole event, the 25-year-old golfer showed the whole golf community that a true champion is someone who puts the needs of others before himself.

As Matthews explained to PGATour.com, which also gives more of the technical golf details: “There are some things in life that are just bigger than golf. And this was one of them.”

Read more:
11 Golfing champions who get by on a swing and a prayer

Read more:
10 Inspirational people with Down syndrome who smashed records and expectations