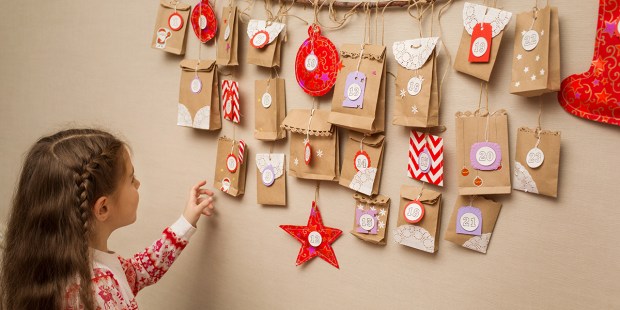 For years I’ve tried to create a liturgical reality through a cultural tradition, but this year I’m doing it differently.

Now that Thanksgiving is over, it’s time to starting thinking about the biggest holiday of the year, both culturally and liturgically.

If you’re anything like me, the struggle to balance the liturgical with the cultural is an ever-present part of the Christmas season, and nothing captures the struggle quite as perfectly as the Advent calendar.

Growing up, our family’s Advent calendar was one of my favorite parts of the season. Even though we didn’t celebrate the season of Advent, the little wooden boxes full of chocolates made the countdown to Christmas full of delicious anticipation. When I began to create Advent traditions for my own kids, I was so excited about the chance to take a favorite childhood memory and transform it into a physical manifestation of the spirit of Advent … but I wasn’t quite sure how.

My early attempts were a little too corrective. In an effort to reject the spirit of consumerism, I rejected the chocolate in favor of tiny boxes full of verses that would, day by day, tell the story of the birth of Christ. Unsurprisingly, this did not inspire a sense of joyful anticipation in my small children and the daily opening of the Advent calendar swiftly became more of a chore than a treat. Over the years, I’ve tried everything from Advent storybooks to Advent puzzles, but none has inspired the anticipation and excitement I remembered so fondly from my own childhood.

I finally admitted to myself that the real reason I loved our Advent calendar as a child was, in fact, because of the chocolate. Granted, I’m a confirmed chocoholic — but there’s something about the daily pleasure of a sweet treat that heightens the anticipation of counting down the days till Christmas. Last year I let my kids embrace that same joy and recreated the Advent calendar of my childhood. Much to my delight (and theirs), the daily opening of the Advent calendar finally echoed with the excitement and anticipation I’d tried in vain to capture for years. But I hadn’t managed to tie that feeling to the liturgical spirit of Advent the way I wanted, which left me with a lingering disappointment.

Over the years, I’ve realized how much power lies in the simplicity of various family and holiday traditions. So this year, I’m determined to simplify things wherever possible — including my yearly quest to master the Advent calendar. I’m keeping the chocolate, because making Advent a sensory experience is a powerful way to make it real. But I’m also borrowing a page from the hymnal and adding the “see” to the “taste.” Instead of tiny verses or stories, I’m going to slip a small picture in each chocolate. I’m going with simple images, like an angel, two sisters, a donkey, a star … and I’m intentionally making the images vague by pulling from a variety of sources, from magazines to Christmas cards.

My goal with this is to give our family a few minutes each day to talk about what the pictures remind us of while we enjoy our chocolate. I’m going to resist the temptation to guide my kids toward the part of the Christmas story I had in mind when I chose them, and instead let them use their creativity and imagination to tell the Christmas story to each other in their own words.

I have no idea if this will finally be the year when the alchemy of the Advent calendar finally pulls in the liturgical season firmly in the way I’ve always wanted, but honestly, I’m at peace with that. Like all families, we’re unique … and this year, I’d rather just enjoy all the wonder of Advent through my children’s unique perspectives.

Read more:
The one Advent calendar your family needs

Read more:
3 Simple ways to prepare your family for Advent