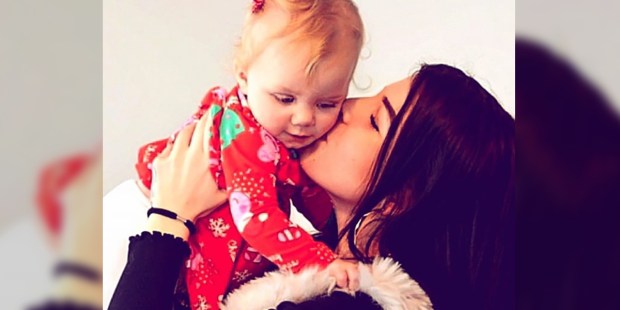 Diagnosed with a fatal heart condition, baby Miyah proves you have to have a little faith.

A British mom, Chloe Conlin, 21, was told by doctors that if she went ahead with her pregnancy, her unborn daughter would not make it to her first birthday. Conlin, who had already experienced a stillbirth, decided to ignore the doctors advice and went on to give birth to a little girl called Miyah 14 months ago.

The baby was born with right atrial isomerism, which meant she only had half a heart. As Conlin explained to the Daily Mail: “When I was pregnant they told me to have an abortion over 10 times because they said she wouldn’t be compatible with life, it would be a real struggle and she probably wouldn’t live until her first birthday.” Luckily for Miyah, the determination of her young mom proved enough to mend her little heart after she underwent open-heart surgery on Christmas Eve last year at the famous children’s hospital, Great Ormond Street in London.

After the operation Miyah went from strength to strength, and is now even taking her first steps as she celebrates her first Christmas away from the hospital ward. She’s beginning to talk and is reaching the milestones doctors believed she’d never make.

Although the doctors can’t actually mend her heart, they can try and help prolong her life. This will entail an operation in the next couple of years when her condition starts to deteriorate, followed by check ups a few times a year, and then it will be down to God as to how long little Miyah’s heart will keep on beating.

In the meantime, Miyah will spend Christmas surrounded by her family and a heap of presents celebrating the life she’s been given with hope for more wonderful Christmases to come.

Read more:
Baby saved from abortion goes on to become a football star

Read more:
How a woman’s will saved a baby from abortion