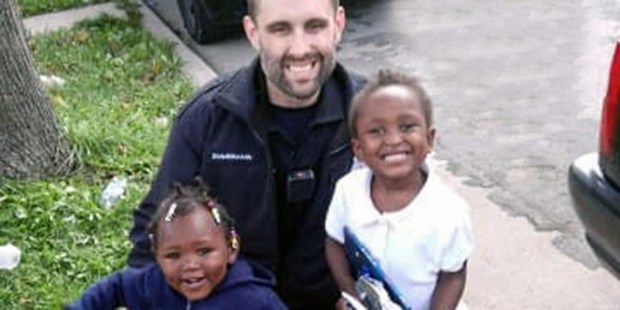 Getting pulled over by the police is enough to fill anyone with anxiety — even when you’ve done nothing wrong. So when Andrella Jackson, a single mom of five from Milwaukee, was stopped by Officer Kevin Zimmerman last autumn, she was dreading receiving a hefty fine.

It was on last October 12 that Officer Zimmerman noticed Jackson didn’t have a correct registration for her car. After signaling Jackson over, he spotted that two of her children, Niyah and Sky, didn’t have car seats; another bookable offense.

However, having heard the mom’s story of how she didn’t have any money and needed to prioritize essential clothing for her kids with winter coming, the policeman, who has worked with the Milwaukee Police Department for 12 years, decided to serve this particular citizen in a most compassionate way.

Instead of issuing the desperate mom a big fine, he opted to give her a verbal warning and headed to Walmart to buy two car seats with his own money. He then went back to his police station and picked up some children’s books and stickers for the girls before heading to the mom’s house to install the seats himself.

Sharing that he was raised to “do the right thing even if no one is looking,” as reported by Alaa Elassar for CNN, the dad of three wanted to ensure the girls were kept safe, having seen the dangers of automobile accidents first hand.

Jackson shared the officer’s generosity and care for her family on Facebook, stating “My girls couldn’t stop thanking him and it made them smile….shout out to Officer Zimmerman at District 5. We appreciate it a lot.”

Zimmerman’s police district also shared their officer’s empathy and compassion on their Facebook page, thanking him for “going the extra mile and going above and beyond your call of duty.”

Read more:
The policeman who brought justice through forgiveness