Yes, there’s actually a St. Corona! And her remains are in Northern Italy 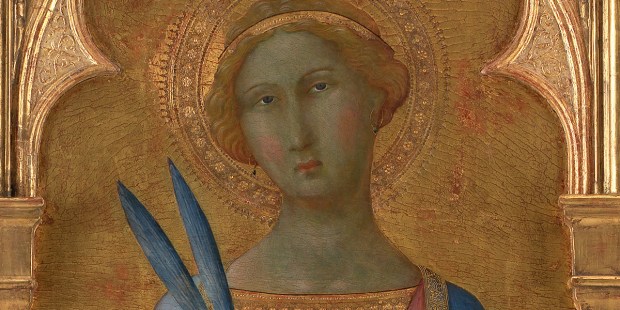 Corona was only 16, and gave her life to comfort a fellow Christian.

Right in the middle of the Coronavirus pandemic is the city of Anzu, Italy. There is a basilica in Anzu where the relics of St. Victor and St. Corona have been preserved since the 9th century. The word Corona is Latin for crown. Ironically, St. Corona is considered as one of the patron saints of pandemics.*

The Coronavirus sweeping the globe is also named for “crown.” The Economist explains:

Little noticed by doctors, let alone the public, until the outbreak of SARS (severe acute respiratory syndrome) that began in Guangdong in 2002, the coronavirus family was first recognised by science in the 1960s. Its members got their name because, under the early electron microscopes of the period, their shape seemed reminiscent of a monarch’s crown. (It is actually, modern methods show, more like that of an old-fashioned naval mine.) There are now more than 40 recognised members of the family, infecting a range of mammals and birds, including blackbirds, bats and cats. Veterinary virologists know them well because of the diseases they cause in pigs, cattle and poultry.

Little is known about St. Corona, but she and the man she prayed for, St. Victor, are listed in the Roman martyrology and the Hagiography of the Church. There is ambiguity surrounding the dates and locations of  St. Victor’s and St. Corona’s martyrdom. Most sources say it was in Syria, which was under Roman rule. Some say Damascus; others, Antioch. Most agree they were put to death in the year 170 A.D. Most historians agree they died during the reign of Marcus Aurelius and that they were put to death by order of a Roman judge named Sebastian.

The story (legend) tells the tale of a Roman soldier named Victor. The Romans discovered that Victor was a Christian. The soldiers brought Victor before a judge, named Sebastian, who despised Christians. He decided to make an example out of Victor. He was bound to a pillar and summarily whipped until his skin was hanging from his body, and then Sebastian had his eyes gouged out. Through it all, Victor never denied Christ.

Nearby was a 16-year-old girl name Corona. She was the wife of one of the soldiers, and she was also a Christian. (Corona’s husband did not know his wife was a Christian). As Victor was being brutalized, Corona decided she needed to help the slowly dying man. She chose to announce her Christianity to all present and hurried over to where they were torturing Victor. She knelt and began to pray for him, letting him know she was there for him. It did not take very long for the soldiers to bring her too before Sebastian.

Sebastian was livid that this young woman had so disrespected his authority. He immediately had her put in the prison and tortured. Then, he ordered her tied to the tops of two palm trees, which had been pulled down to the ground. At his signal, the ropes holding the trees bent were cut. The trees sprang back away from each other to an upright position. The force was so great that Corona’s body was ripped apart. Then Sebastian ordered Victor beheaded.

The remains in the basilica have been there since the 9th century.

In 1943 and again in 1981, they were examined, and the bones are from both a male and female. In the 1981 examination, they discovered cedar pollen, which was a typical plant from the Mediterranean basin during the time in question. Archeologists confirm that this pollen would have been present in Syria and Cyprus.

St. Victor and St. Corona are pre-congregation saints meaning that they were recognized as saints prior to Church canonization processes being standardized. (The first saint canonized by a pope was Ulrich, the bishop of Augsburg, who died in 973. He was canonized by Pope John XV at the Lateran Council of 993. Canonization became the general law of the church under Pope Gregory IX (1227-41)).

St. Corona’s feast day, along with St. Victor’s, is May 14. We ask both of them to pray for us all that this pandemic subsides.

* Several readers have asked us about St. Corona being a patron saint to invoke against epidemics. This can be verified in various German-language sources, as this particular aspect of devotion to her is most common in Austria and Bavaria.

Also, her name, in reference to the Latin word for crown, surely refers to her martyrdom, as she received the “martyr’s crown.” We might say this is similar to St. Veronica, known for wiping Our Lord’s face on the Way of the Cross. Veronica, literally, means “true image,” a reference to the image of Christ’s face that he left on her cloth.

It is good to remember that the saints belong to the Universal Church, and thus the patronages of one or another might vary from one country to another. For example, in many English-speaking countries, if you ask who is the patron of animal lovers, you’ll surely hear St. Francis. But if you were to ask that same question in Italy or Spain, you’d hear that St. Anthony Abbot is the patron. See here for our slideshow of the blessing of animals on St. Anthony’s day!

Thus, about St. Corona, we can say that Providence truly has given her to us at this time, and that she and surely all the saints, are praying for our world in this dire situation.

Read more:
Mass canceled? The Church is still at prayer!