While many die without family, pope urges: ‘Do not be afraid, you are not alone’

In Palm Sunday homily, Pope Francis says that even when it seems God is not responding, Jesus is there.

Pope Francis focused his Palm Sunday homily, live-streamed amidst a vacant St. Peter’s Basilica and Square, on Jesus as servant, a God who serves us. Surrounded by the stark images of emptiness, his assured that never and no matter what, we are not alone in our suffering.

Just as at the special urbi et orbi ceremony on March 27, the special image of Mary and the miraculous Crucifix were again present, and the Holy Father incensed them at the beginning of Mass.

Abandonment. In today’s Gospel, Jesus says one thing from the Cross, one thing alone: “My God, my God, why have you forsaken me?” (Mt 27:46). These are powerful words. Jesus had suffered the abandonment of his own, who had fled. But the Father remained for him. Now, in the abyss of solitude, for the first time he calls him by the generic name “God.” And “in a loud voice” he asks the most excruciating question “why”: “Why did you too abandon me?”

The pope noted that the Lord is quoting Psalm 22 — the psalm sung for the Responsorial Psalm in this Mass — and “they tell us that Jesus also brought the experience of extreme desolation to his prayer.” 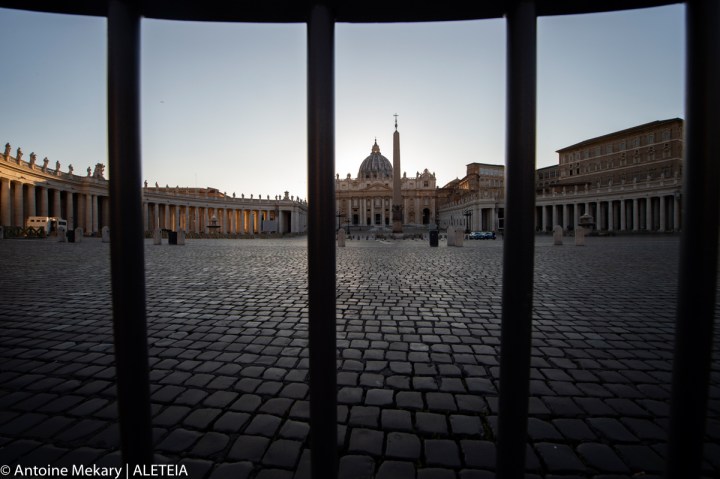 “But,” he added, “the fact remains that he himself experienced that desolation: he experienced the utmost abandonment, which the Gospels testify to by quoting his very words: Eli, Eli, lama sabachthani?”

Pope Francis voiced the question of why all of this took place, but also gave the answer: “it was done for our sake, to serve us.”

So that when we have our back to the wall, when we find ourselves at a dead end, with no light and no way of escape, when it seems that God himself is not responding, we should remember that we are not alone. Jesus experienced total abandonment in a situation he had never before experienced in order to be one with us in everything.He did it for me, for you, to say to us: “Do not be afraid, you are not alone. I experienced all your desolation in order to be ever close to you.”

Prayer for this evening
Top 10
1
J-P Mauro
Hear Clapton and Pavarotti sing a prayer to the “Holy Mothe...
2
Philip Kosloski
Ascension vs. assumption: What is the difference?
3
Philip Kosloski
What happened between the resurrection and ascension of Jesus?
4
I.Media for Aleteia
These 30 shrines will lead the Rosary Relay for end of the pandem...
5
J-P Mauro
We need better church music, say Catholics in the Philippines
6
Philip Kosloski
What was the message of Our Lady of Fatima?
7
Larry Peterson
Benedict XVI called him “one of the most unusual saintsR...
See More
Newsletter
Get Aleteia delivered to your inbox. Subscribe here.