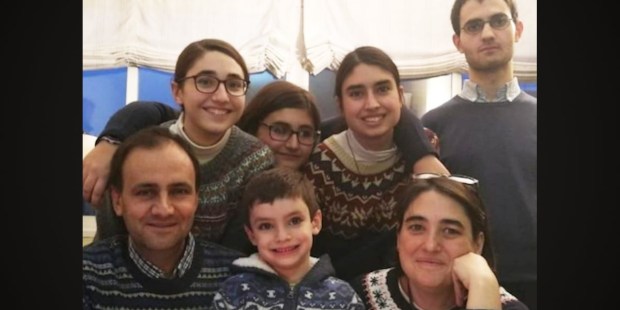 In the face of immense suffering, this mother finds strength and hope in Christ and His promise of eternal life.

Pilar Carmena Ayuso just lost her husband, Guillermo Gomez, who died of coronavirus at just 50 years old. They were married for more than 23 years, and together had five children and a beautiful family. Death has separated them physically, but they’re closer than ever.

It all started on the birthday of one of their daughters, when Guillermo woke up with a high fever. He had symptoms of flu, congestion, and a cough that they thought would be temporary. But as the hours passed, his symptoms became more complicated.

He had no difficulty breathing, but he was suffering from dizziness, and a family doctor came to his house to look at him. They called an ambulance and he was admitted to the Gregorio Marañón General University Hospital in Madrid.

At first he was under observation. They didn’t suspect at the time that he had the novel coronavirus. At that time, they also didn’t have the necessary equipment to test him for COVID-19. That night they isolated him in a room as a preventive measure.

The next day they took him up to the ICU where he was tested. The doctors told his wife that she could no longer stay with him, but that she had to go home. Shortly after she left, she was called back to the hospital to say goodbye to her husband, because his condition had become very precarious.

Pilar arrived at the hospital with a priest so that her husband could receive the sacrament of Anointing of the Sick, and she said goodbye to him. That same afternoon they found out that the coronavirus test was positive, and from then on, she stayed at home with her children, who were already being quarantined while Guillermo spent his last hours in the hospital.

Pilar says that during all this time the hardest thing was not being able to see him, be with him, and talk to him. The whole hospital, and especially the ICU, had patients with COVID-19 and no one else could go in.

Meanwhile, at home, Pilar lived through her suffering with a loving heart and faith in God. “It’s very hard, but Christ is sustaining me. To feel that He is with me on the cross, and I with Him, and that we accompany each other, and to know that Guillermo is in His hands, is what gives me strength,” she tells Aleteia.

Pilar and her children have turned to prayer and found comfort: “We pray the Rosary every day, and we’re praying a novena to St. Joseph that we finished and have begun again. We also pray for all those who are in similar situations.”

With an admirable faith, Pilar shares that “there were days when I was in a very bad way, but now I’m seeing it with more peace, with acceptance. Living it with acceptance helps you to live everything with less desperation, with the suffering of not seeing him but with the peace that in the end it’s God’s will, no matter what.”

A few days before Guillermo’s death, Pilar wanted to share with others how they were living the experience as a family. She wanted to share it with people who are going through the same thing, or who will have to go through it in the future. She wants others to feel support and solidarity in their suffering.

Her testimony shows that even if we are not prepared for such difficult trials, knowing God gives us life and helps us to live this suffering “with less desperation,” as Pilar says. She knows from experience that love knows no limits and that it’s important to hold on to the cross, especially in times like these.

Two days before Guillermo’s death, she sent this message:

“I’m grateful for so many messages of support and prayer. This gives me life. Knowing that there are many people praying for him; that in the end, if he is not healed, it’s because there’s a greater good. It’s very hard, very difficult, but also at the same time God allows you to see the love of others, and how He loves us. And that is something very big.”

Love takes concrete form in family unity, in messages of support from others, in friends who pray for each other, and in the dedication of the doctors who accompany our sick loved ones. Love allows us to look at reality with a new perspective. It transforms us into witnesses of something higher and greater than ourselves, which allows us to give others true understand and compassion.

Pilar and her family received the news that Guillermo had died, and even in their sorrow, they are more united than ever. They continue to live in an atmosphere of love, with the confidence that they are not alone. Only with a heart that loves deeply can Pilar find the courage to say, “He has gone to heaven, with Jesus. I trust in God, who gives me strength and peace.”