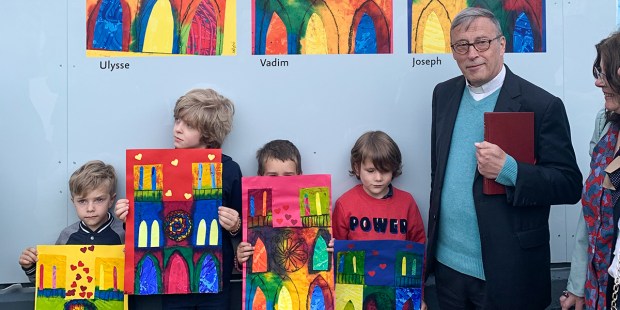 Aleteia was present for the inauguration of an impressive art exhibition, as well as the blessing of the statue of the Virgin of Paris at Notre Dame Cathedral.

In October 2019, six months after fire nearly destroyed Notre Dame Cathedral in Paris, the capital’s Archbishop Mgr. Michel Aupetit made an appeal to children from 4-16 years of age to participate in an art project “Dessine-moi Notre-Dame : l’église que vous connaissez ou l’église que vous imaginez”  — “Draw me Notre Dame: the church you know or the church you imagine,” in English.

The project was an invitation for young artists to convey their perception of what Notre Dame represents to them. The selected works of art would then be reproduced and placed on the boarding protecting the cathedral and passers-by while the cathedral undergoes its reconstruction.

Finally, on June 16, the finalists of the competition were revealed during the inauguration of the exhibition at Notre Dame. From over 6,000 entries across the world, the impressive results revealed a few potential Michelangelos among these talented school children. Aleteia was fortunate to talk to a few of them as they saw their work go up on display in the presence of Archbishop Aupetit and Mgr Patrick Chauvet, the Cathedral’s dean, and their delighted parents.

Six young boys (aged 6-8) from St. Joseph’s school in Paris had their pictures selected and four of them — Vadim, Ulysse, Joseph and Max — were present for the installation with their original designs in hand. A little shy, the boys shared how they were sad about the fire and through the guidance of their art teacher, Tracy Mead, they were happy to be able to portray their versions of Notre Dame in all its glory.

The collages the boys made actually necessitated quite a complex process. The youngsters gave differing versions of how long it took them to put their designs together: from a “couple of hours” to “a week”; however, Mead gave us the reality of the process.

The project was a perfect opportunity to share with the children the cathedral’s imposing architecture as well as its religious significance. Over a few weeks the children put their collages together with an emphasis on the Trinity. Mead explained how the cathedral is on three levels and the three doors at its front represent God the Father, the Son and the Holy Spirit.

The children used ink diffusing paper to capture the light and the beauty of the cathedral’s structure, and the stained glass windows that are so key to the cathedral’s Gothic architecture. The results are an impressive collection of pictures that show artistic flair and a great sense of geometry!

Interestingly, the cathedral’s dean, Mgr Chauvet was chaplain to the school’s parish of St. Joseph’s 38 years ago, according to the school’s principal, Véronique Bauer. So it was lovely to see him pass some time chatting to the children and the school staff.

While there were many other beautiful projects on display, the artwork of 10-year-old Annociade was truly breath-taking. The young artist, who goes to St. Pie X school in St. Cloud, explained to us how she spent the fall vacation (two weeks in France) working on her project. When asked why she had painted the Virgin Mary over the cathedral, she explained that Mary is her patron saint and she believes that the Blessed Virgin is watching over the Cathedral, protecting it.

We asked Mgr Chauvet what the children’s project means to him and to the cathedral that he has been dean of since 2016, and he said quite simply, “hope,” with a little glimmer in his eye. He went on to share that their work shows how the kids love Notre Dame and that we’re prepared to do anything for the cathedral.

With all the artwork on display there was another meaningful part of the event: the blessing of the statue of the cathedral’s Virgin Mary and Child that has taken temporary residence on the cathedral’s forecourt.

The dean and the archbishop called all the children to gather in front of the statue and before Mgr Aupetit carried out the blessing, he explained to the children the significance of the statue. During the fire, the Virgin of Paris was one of the rare artifacts that remained intact. Surrounded by rubble the stone statue, which was created in the 14th century, stood undamaged, as if it were being protected by the Virgin herself.

Now she is placed for all to see, watching over the cathedral, Paris and its residents. Although, as Mgr Aupetit reassured one concerned child, she’ll be back in place as soon as the cathedral is ready to welcome her. For now, just like the children, she is a symbol of hope and faith, which seems so vital at the moment.

Read more:
Why drawing is the perfect hobby to start in quarantine