Benedict XVI to return to Vatican on Monday 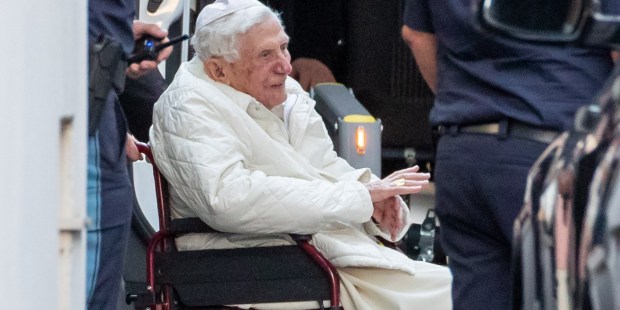 After four days with his ailing brother, the pope emeritus will be back home in Rome.

Pope Emeritus Benedict XVI will leave Germany on June 22 to return to the Vatican, according to Clemens Neck, spokesman for the Diocese of Regensburg. The Vatican confirmed the scheduled return of the pope emeritus, who is currently at the bedside of his gravely ill brother, Georg, age 96.

On this last day in his homeland, Benedict XVI plans to continue to spend time with his brother.

On June 20, the two men celebrated the Eucharist together. The emeritus pontiff then received a visit from the apostolic nuncio to Germany. He also was able to visit the house in which he lived as a teacher between 1970 and 1977 and spent time in prayer at the Ziegetsdorf cemetery, where his parents and sister are buried.

Benedict XVI arrived in Munich on June 18 at around 11:45 am, so the former pope will have spent four days with his brother before his return. This is his first trip outside of Italy since his renunciation in 2013.

Read more:
Pope Francis: Death does not have the last word, life does!