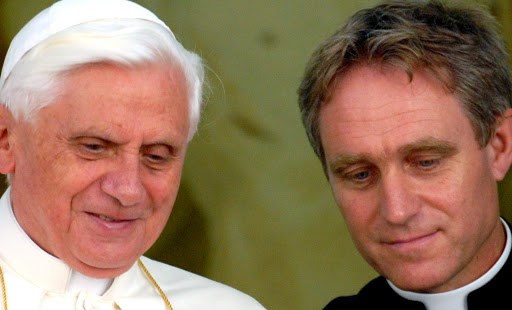 © DANIELE COLARIETI/CPP
September 24, 2006: Pope Benedict XVI and his personal aide Rev. Georg Gaenswein during the Angelus in his summer palace in Castel Gandolfo, on the outskirts of Rome.
Share
Print
Kathleen N. Hattrup - published on 08/03/20

Gänswein assures that face infection is “painful but not serious.”

Media attention focused on Benedict XVI on August 3, after his biographer told a German newspaper that the pope emeritus has an infection and is extremely frail. But the personal secretary of the pope emeritus clarified later in the day that Benedict’s health condition “does not raise any particular concern.”

Benedict’s biographer, Peter Seewald, was able to visit the retired pontiff on August 1 to present him with his latest work, due in English in November.

After that meeting, Seewald commented to the press that the pope emeritus is frail, noting his voice is barely audible, and speaking of a skin infection on his face. He also noted Benedict’s hopes to return to writing.

Monsignor Georg Gänswein responded to the media coverage of Seewald’s comments, saying that

Pope emeritus Benedict XVI’s health condition does not raise any particular concern, except for the concern due an elderly 93-year-old who is going through the most acute phase of a painful but not serious illness.