Miracles with a soccer ball: Though promoted by Anglican pastors, popes love the sport 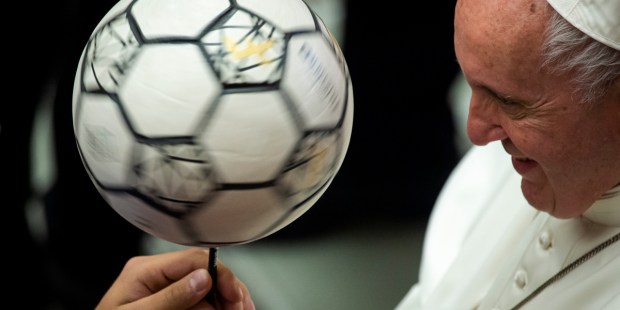 The 20th and 21st centuries have given us one pope after another fascinated by the pitch.

At the end of the 19th century, Anglican pastors from the United Kingdom began to spread a brand new activity throughout Europe: football (currently known as “soccer” only in the USA). It was an immediate success, but the Protestant origin led Catholics to be wary.

It was Catholic youth who convinced the priests and then the bishops of the benefits of this new Anglo-Saxon sport. St. John Bosco testifies to this with tenderness: “How can we  make the children happy, how can we bring them together? Throw a ball in the street and the children will arrive immediately.”

Then began the golden age of the relationship between the Church and football: that of patronage, which would flourish during the first half of the 20th century throughout Europe and then in the rest of the world.

At the same time, in Italy, the popularity of “calcio” (“football” in Italian) made it the only modern “religion” capable of living side by side with the Church, and even the popes couldn’t ignore this immensely popular passion. Benedict XV (1914-1921) and Pius XI (1921-1939) encouraged the construction of football pitches in their diocese of Rome, appealing in particular during the interwar period to the powerful American organization of the Knights of Columbus.

Read more:
The Knights of Columbus has supported every pope since the Order was established in Rome

However, it was not until Pius XII (1939-1958) that a football team was officially received at the Vatican. This was Athletic Bilbao, the famous Basque team in the Spanish championship, who went to the Vatican in 1956 after playing and losing a final against AC Milan. Pius XII’s commentary showed that the era of professionalism had not yet arrived: he praised the “sincere amateurs of an activity to which [they devote themselves] with soul and life, putting into it a youthful ardor, a genuine effort.”

Faith, an asset on the pitch

Pius XII also drew a beautifully spun comparison with the ball, which shows his command of sports tactics:

In football as in everyday practice, and in order not to lose the match, one must often defend one’s own area with courage, confidence and energy, if one does not want to be overwhelmed by the passions that are unleashed; often one must know how to behave in the difficult milieu of the field in order to find the moment to attack without losing sight of the opponent’s movements and the possible dangers to one’s own goal; often one must advance with intelligence, resolution and agility, in good harmony with the whole line. You mustn’t miss the right moment, and you mustn’t let it be lost.

His successor, John XXIII (1958-1963), was not a sporting pope, and as with other sports, he displayed a total disinterest in football. This was in contrast to the rest of the Roman Curia, where from that time on, we see even bishops and cardinals defending their teams. Paul VI (1963-1978) was of the latter group, showing a particular attachment to local, family-oriented football. He declared that “whoever goes out on the field and has faith, has extra equipment.” Footballers would remember this, sometimes to the point of superstition!

In 1965, Paul VI received the players and managers of the football club of Brescia, the city where he was born. In his speech, with his characteristic intellectual style of address, he emphasized the spiritual dimension of football:

Sport itself has a moral and educational value of the first order: it is a gym for developing strong virtues, a school of inner balance and outer control, propaedeutics for the truest and most lasting achievements, for definitive and lasting victories … that is to say, those of the spirit!

On this occasion, the pontiff gave the visitors an unusual painting, representing Christ wearing white and blue—the team colors! This work, which shows that the universality of the Church does not exclude the defense of local identity, is still on display at the Brescia Calcio headquarters.

John Paul II, elected in 1978, was himself a footballer before becoming pope. In his youth, he played as a goalkeeper for his hometown club, MKS Krakow. Those who remember him speak of him as an excellent goalkeeper and a great leader for his teammates. During his pontificate, he made many contacts with the world of football. He met many times with delegations of national and local teams: Ireland, for example, during the World Cup in Italy in 1990, or the rival clubs from Lazio and Rome after their respective successes. He organized many charity matches, and inquired about the results of matches between Poland and Italy. But his taste for football was nourished by simple joys.

Once, during a stay at Castel Gandolfo, important personalities awaited the Polish pope as he strolled through the gardens of his summer residence. His secretaries told him that they were waiting for him, but the pontiff didn’t listen to them: he looked at a little boy, the son of a gardener, who was playing ball. The secretaries insisted, but the Pope shook his head firmly as if to say: “I’m sorry, I don’t have time, now I have to play football.” He then exchanged, in front of the family and a photographer, a few passes with the little boy.

Cries of “Santo subito!” in the stadium

Highly appreciated by footballers who gradually became stars, John Paul II was the first pope to truly put great sportsmen at the service of the Church. Four days after his death, a high-voltage competition took place between Inter and AC Milan, the Lombardy capital’s arch-enemies. At stake: a place in the semi-finals of the Champions League. While the two teams battled it out on the pitch, the music in the stands was different than usual: songs were played and banners were unfurled to pay tribute to the Polish pope. One of the banners already bore the words “Santo Subito”—a succinct phrase which can be roughly translated as “make him a saint immediately”—a slogan that was often repeated in St Peter’s Square in the days following John Paul’s death. It was a sign of the affection the team’s midfielder had for him.

Cardinal Tarcisio Bertone, Benedict XVI’s Secretary of State, is a fervent supporter of Juventus Turin, and decided to launch the Vatican’s football World Cup, the Clericus Cup, in 2007. The tournament—which continues to be an annual event—sees priests from all over the world competing on the turf, on a pitch just a stone’s throw from the small Vatican state. It differs from other usual competitions in that it uses a blue card, an alternative to the yellow and red cards, which instead of expelling the player at fault, sends him to “purgatory” before allowing him to resume play. The Salesian Cardinal, convinced of the positive role that the game of football can play, especially for young people, is constantly involving the Church in the sport. Benedict XVI, on his part, is a fan of the Bayern Munich team.

With Pope Francis, the Vatican got a real football fan as pope. However, rather than the glitter of business football, he prefers the amateurism and fervor of Buenos Aires’ public stadiums. A member of the San Lorenzo fan club, for which he still pays the monthly subscription, he has not watched a football match on television since 1990, when he sold his seat. He admits, for example, that he has never seen his country’s living legend Lionel Messi play, even though he has hosted him at the Vatican on several occasions. However, Pope Francis has entrusted “la Pulga” (as Messi is affectionately known) with an important mission, as he has done for Samuel Eto’o, James Rodrigues, Gianluigi Buffon, Philippe Lahm and all the great celebrities of world football, as witnessed by this speech delivered in 2013 at a reception during a friendly match between Italy and Argentina:

You, dear players, are very popular: people follow you very closely and not only on the field but also off it. This is a social responsibility! Let me explain: during the game, when you are out on the pitch, you display beauty, generosity and camaraderie. If a match lacks these qualities it loses force, even if the team wins. There is no room for individualism; team coordination is paramount. Perhaps these three qualities, beauty, generosity and camaraderie, can be summed up in a sports term that we must not forget: “amateur,” enthusiast. It is true that national and international organizations professionalize sport, and it should be this way. But this professional dimension must never push aside the initial vocation of an athlete or team: be amateurs. When an athlete, even a professional one, cultivates this dimension of being an “amateur,” society benefits and that person strengthens the common good with the values of generosity, camaraderie and beauty.

Read more:
Pope says he played with a homemade soccer ball as a kid: Leather balls were expensive

The attraction of the ball

Francis, who never ceases to remind football players of the immense influence they have on young people, at the same time often renews his praise of Pius XII’s love of the sport; Pius XII remembered with fondness and joy having gone to the El Gasómetro stadium in Buenos Aires in 1946. As with John Paul II, Francis also rediscovered the important playful dimension of patronage, and even went so far as to send a video message to “lovers of football” on the occasion of the 2014 World Cup in Brazil, which he saw as an opportunity to defend solidarity between peoples.

He seems to have understood the great power of football from a very early age. In October 2019, he thanked the Italian National Football Team for visiting the children of the Vatican’s “Bambino Gesú” Pediatric Hospital, and he shared this memory with them:

The ball has an attraction. I remember that there was a small square a few meters from my house. We used to play there, but we didn’t always have a ball at our disposal, because at that time the ball was made of leather, it was very expensive. There was still no plastic, there were still no rubber balls … There was a cloth ball. Even with a rag ball you can work miracles.