English Catholics struggle to save crucifixion mural in closed church 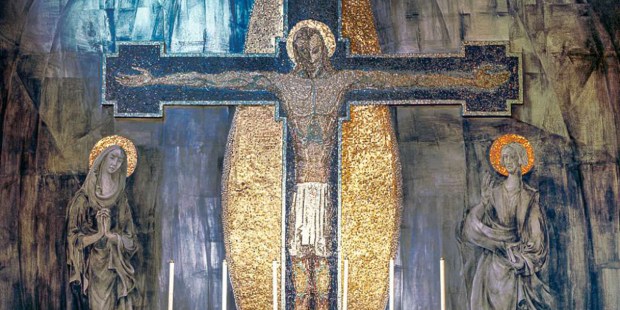 The mural has survived in the derelict church for 3 years, but will it last much longer?

It has been more than three years since the Church of the Holy Rosary in Oldham, England, had to close its doors, but there is still an effort alive to preserve the mural of the crucifixion that emblazons the wall of the sanctuary. The mural is a production of the famous 20th-century Hungarian artist Georg Mayer-Marton, a Jewish man who fled Europe during the Second World War.

The call to action is led by SAVE Britain’s Heritage, a conservation organization concerned with the preservation of all of the United Kingdom’s most important cultural works. According to Catholic News Agency, the charity has implored the public organization Historic England to designate the former church building as a historic site, which would protect the mural from deterioration, vandalism, or destruction due to redevelopment.

Completed in 1955, the Mayer-Marton mural includes both mosaic and fresco features. The image of Christ on the cross was completed using mosaic tiles, which also appear in the halos of the figures of Mary and John the Apostle. The remaining space on the wall was painted with wonderful detail in fresco images. A press release from SAVE Britain’s Heritage explains that the frescoed space was painted over in the 1980s, but the group is confident that it can be restored to its original condition.

SAVE goes on to note that this is the only surviving work by Mayer-Marton to incorporate both mosaic and fresco. As for the relevance to British history, the group suggests that the relation of the piece to such an esteemed artist is reason enough to preserve the work. They write:

The significance of the mural has been highlighted by a number of national experts including the Twentieth Century Society, the Ceramic and Architectural Tiles Association as well as several leading academics and architectural historians.

Mayer-Marton (born Hungary 1897, died Liverpool 1960) was a leading figure in the Viennese art world in the 1920s and 1930s. He and his wife escaped to Britain in 1938, where he began working as a lecturer for CEMA, the predecessor of Arts Council. In 1952 he was appointed as a lecturer at the Liverpool College of Art. There he established the Department of Mural Art. The course in this technique which he instigated at the College was the first of its kind in the UK.

The CNA report also mentions that preserving such a piece is not unprecedented. Another of Mayer-Marton’s pieces, a mosaic depicting Pentecost, was transferred from Holy Ghost Church in Netherton to the Liverpool Metropolitan Cathedral in 1989. However, a transfer today would require raising more than $300,000 in funding.