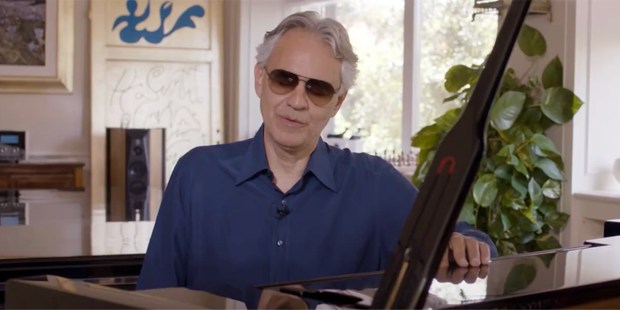 The children’s choir greets the Blessed Mother in at least a dozen langugages.

Esteemed tenor Andrea Bocelli has lent his voice to the soundtrack to the new Fatima film, which was released on August 13. The famed operatic singer can be heard on three songs on the soundtrack, one of which was a newly composed treatment of “Gratia Plena” specifically written for the film by Paolo Buonvino.

The new “Gratia Plena” is composed in epic style, with a full orchestra and children’s choir supporting Bocelli’s soaring high notes. The children’s choir, which was a nice touch for a movie that is all about the impact of children’s faith, provides a chant-like introduction, which continues as Bocelli takes up his part. They are eventually joined by a full-scale choir that increases the intensity of the music, while multiple tracks of Bocelli’s unmistakable voice duel each other in separate octaves.

The children, who are representative of the faith of the innocents across the world, sing praises to the Blessed Mother in over a dozen languages: English, French, Hebrew, Latin, German, Greek, Arabic, Japanese, Polish, Italian, Kinyarwanda, and more. Bocelli doesn’t go through quite as many languages as the kids, but he still effortlessly glides over English, French, Hebrew, and Latin.

We especially liked the poignant recitation of the Hail Mary, spoken at the end of the piece in a child’s voice. The continued orchestration behind the prayer emphasizes the importance of the words, before Bocelli caps it off with a musical “Amen.”

In an interview with CNS, provided by Catholic Review, Bocelli spoke about his work in the feature film. He said:

“It was a joy to be part of this project, as Mary is an ever-present and bright presence in my and my family’s life. I was able to go to Lourdes (France) as a child and in recent years I’ve been going to Medjugorje (Bosnia-Herzegovina). I have always found poetry and beauty in the Church attributing central stage to a female presence who works on our behalf. I am a devotee of the Virgin, to whom I always dedicate part of my prayers.”

Read more:
Andrea Bocelli in Fatima: Here every breath is a prayer

The new “Gratia Plena” can be heard during the closing credits of Fatima. Also included on the soundtrack album are two other songs by Bocelli, “Gloria the Gift of Life” and “Ave Maria Pietas,” both of which were featured on his 2018 album, Si.