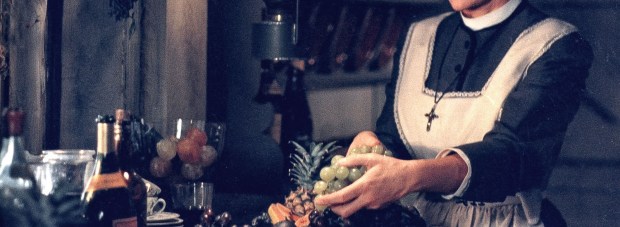 On what Pope Francis sees in ‘Babette’s Feast,’ and why he thinks we should re-watch some old classics.

On several occasions, Pope Francis has mentioned his fascination with Gabriel Axel’s film, based on a short story by Karen Blixen, titled Babette’s Feast (1987). As early as 2016, in his apostolic exhortation Amoris Laetitia (2016), he referred to the film in the following terms: “We must recall the joyful scene in the film Babette’s Feast, where the generous cook receives a grateful embrace and praise: ‘With you, how the angels will feast!’”

More recently, in his book of interviews with Dominique Wolton titled Politics and Society (2018), the pope refers to the film and “to the transformation of people who were locked up by words, and who are freed by a feast that teaches them another way of being happy.”

Babette’s Feast as a Eucharistic metaphor

In the book TerraFutura, published on September 9, 2020, when journalist Carlo Petrini asks the Supreme Pontiff about the importance of the meal as a moment of sharing in community, the latter refers, once again, to “one of the best films [he] has ever seen”: Babette’s Feast. He recalls the plot as follows: “The story takes place in a very strict Calvinist community in Denmark. The protagonists, two sisters, daughters of a Protestant pastor, had each fallen in love but rejected this feeling because it was wrongly considered contrary to the very strict morals they had inherited. They lived a life of renunciation, not only in love but in everything, including food and clothing. A kind of continuous self-flagellation. The French cook Babette, a ‘foreigner’ in this context, after winning a rich lottery prize, decides to cook a sublime meal for the whole community, and by this gesture she manages to make everyone feel and see human beauty. She manages to make them perceive this divine pleasure that has been wrongly suppressed for too long.”

In this interview-book, the pope says that cuisine participates in the construction of identity and reflects people’s intimate convictions. “Choosing one’s own food is one of those choices. It is a powerful mechanism for change: it means rewarding one productive and economic model rather than another.” The Supreme Pontiff points out that among the main things on which people spend money are food, clothing, cosmetics and pets. Food is thus distinguished from a certain “underlying worldliness [that] characterizes this era and leads us to appreciate an artificial, ephemeral and light beauty …”

On the other hand, there is undeniably a symbolic significance in the act of eating and drinking as a community that recalls Eucharistic feasts: that of the wedding feast at Cana or that of the Last Supper. In this regard, the 266th pope recounted that it was his custom, when he was an auxiliary bishop in Buenos Aires (Argentina), to distribute Babette’s Feast to the extraordinary ministers of Communion for whom he was responsible. “Because if you have to bring the Eucharist to a sick person, you can’t do it rigidly; you have to do it with love and joy. You have to know how to grasp the beauty of the gift.”

The virtues of “eating” and “drinking”.

“There is true communion in eating and drinking,” the pope told Dominique Wolton in Politics and Society. The pontiff again broached the subject in TerraFutura with the founder of Slow Food, a movement that advocates a more qualitative and responsible gastronomy. Pope Francis reminded the author of an Arabic saying “which is probably also found in the Bible, written in a different way,” according to which “to create friendship, you need pounds of salt.”

“That is to say,” continued the pope, “to create a relationship, you have to eat together multiple times; you have to share food. Food is an instrument of conviviality. Breaking bread is the most emblematic gesture: you break the bread and give it first to the guest. You share it.” According to the pope, two tendencies, each as harmful as the other, seem to characterize the current era of opulence: “We sometimes exaggerate, on the one hand with the spectacle of the act of eating, and on the other with a voracious and unbridled approach.”

Here, the pope’s words are reminiscent of other pages in TerraFutura where the Catholic Church’s position on pleasures of the body is discussed. The Supreme Pontiff recalls that the Christian catechism encourages healthy and just pleasure, and condemns that which is only “the expression of an underlying egoism and individualism,” that which seeks “food for food’s sake, and not the relationship with other people, of which food should be a means.” In sum, “when one has the ability to put people at the center, then eating is the supreme act that promotes conviviality and friendship, creates the conditions for the birth and maintenance of good relationships, and acts as a means of expressing values and cultures.”

Some lessons of humanism and fraternity in the cinema

Babette’s Feast also provided an opportunity to discuss, in the following pages of the book, the great films that marked the pope with their depth and beauty.

“I love cinema. I’m passionate about it,” he tells Carlo Petrini. From his childhood, he remembers having seen the great films of post-war Italian neo-realism, whose “great wisdom and great stories” he praises: the films of Aldo Fabrizi, Anna Magnani, Vittorio De Sica, etc. “La strada is for me another masterpiece of Italian and Christian humanism,” he says. Fellini’s film offers, through the adventures of a bully (Zampano) and an innocent (Gelsomina), a beautiful example of “human fraternity” and “social friendship” despite differences, values dear to the Supreme Pontiff and which will be the subject of his next encyclical. “We should see these films again to understand how we have changed and how our societies have changed, not always for the better,” he concluded.

Read more:
A literature teacher pope: ‘Querida Amazonia’ a call to stop and admire something beautiful

Read more:
Why does Pope Francis want us to watch the movie “Babette’s Feast”?