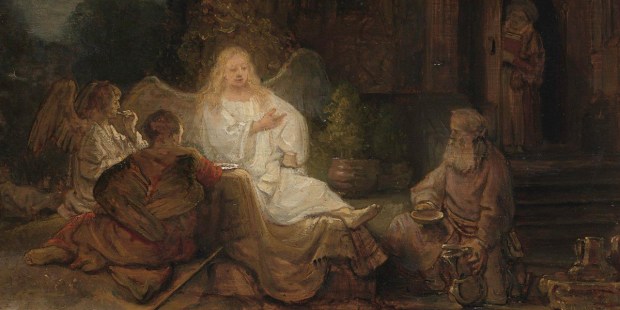 “Abraham and the Angels” could break the record sale price for a Rembrandt, currently set at $33.2 million.

Sotheby’s auction house is preparing to launch an auction that will include a rare biblical themed masterpiece from the famed Dutch artist Rembrandt. The painting, titled Abraham and the Angels (1646), depicts the biblical narrative of Genesis 18, when Abraham is visited by three angels who announce that Sarah would give birth to a son.

According to the Sotheby’s website, this painting is particularly rare, as it is one of only 29 paintings from Rembrandt to depict scenes from the Old Testament. As the other 28 works are in the hands of  collectors and museums, the auction house noted that this may very well be the last chance for interested parties to acquire an Old Testament scene by Rembrandt.

Art News reports that the work is a small-scale oil painting, only 6 ¼ inches by 8 ¼ inches. Despite its size, the images within the scene are highly detailed, with background scenery that seems almost photographic. The auction price is set to start at $20 million, but it could rise as high as $30 million, which would make it the second highest price to ever be fetched by a Rembrandt. The Art News report explained that the current auction record for a Rembrandt piece is $33.2 million, for Portrait of a Man with Arms Akimbo, which sold at Christie’s 2009.

In 2017, The Frick Collection, a Manhattan-based art museum, was proud to include Abraham and the Angels in an art show dedicated to Rembrandt’s depictions of Abraham, titled Divine Encounter: Abraham and the Angels. At the time, it was the first public display of the masterpiece in over a decade.

The Frick showcase, featured below, was expertly curated by Joanna Sheers Seidenstein. She compares Rembrandt’s stylistic choices in Abraham and the Angels to his previous works in order to show the significance of the painting to the artist’s development. She explained:

“Neither of them [Abraham and Sarah] shows much of a reaction, as if they do not fully grasp what is unfolding before them. Suspended between darkness and light, they experience a delay in comprehension, a lapse between seeing and understanding. This represents a significant departure from Rembrandt’s earlier works, in which divine encounters yield immediate reactions. Figures startle and flail and their facial expressions register great shifts in emotions.”

Art News reports that Abraham and the Angels is scheduled to tour museums in Hong Kong, Los Angeles, Amsterdam, and London, before heading to New York for the January auction.