The "Holy Face of Jesus" was found to match the image on both the Shroud of Turin and the shroud of Oviedo.

“Then the other disciple also went in, the one who had arrived at the tomb first, and he saw and believed.” (John 20:8)

In the central Italian region of Abruzzo, about 20 miles (30 km) inland from Pescara on the Adriatic Sea, is a small village called Manoppello. Ordinarily an obscure hill town with a population of 6,900 people would be insignificant. However, on the outskirts of Manoppello is a Capuchin church housing a mysterious icon reputed to be the Holy Face of Jesus. 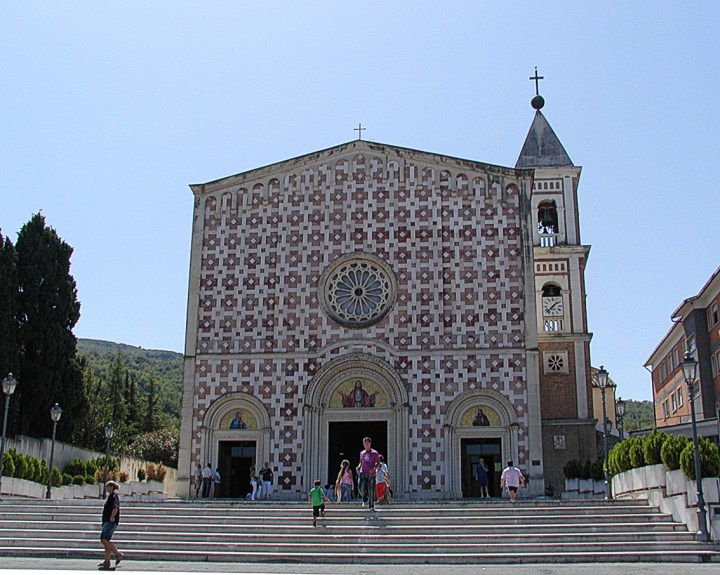 The history of the mysterious cloth

According to an old tradition, an anonymous pilgrim arrived at the church in 1508 with the cloth inside a wrapped package and gave it to a doctor named Giacomo Leonelli. He went into the church where he opened it and discovered the image. The doctor went back out only to find that the mysterious pilgrim had disappeared. The image was owned by various families in Manoppello until it was given to the Capuchins in the early 17th century. Since then, it has remained inside the church safeguarded by the friars.

Upon entering the church, visitors are often struck by how small the image is. Indeed, at the end of the long nave, within a glass encasement behind the main altar, the small 9.5 x 6.5-inch (17 x 24 cm) image is difficult to discern.

However, while walking toward it, a mysterious face enclosed within a silver reliquary or monstrance begins to appear. Walking closer still, the visitor notices that the face is transparent, as the large window panes on the apse behind it can be seen through the image.

A two-way staircase behind the altar on the other side of the image allows for incredibly close observation. Once atop the staircase, visitors can stand just inches away from the image of Jesus. It is striking how the image is just as perceptible from this side, albeit in reverse.

The image of Jesus

The image depicts the face of a man with long hair, a light bearddivided into bands, eyes opened (one slightly more than the other), and the mouth open. His countenance is peaceful, and there are no signs of pain or unease.

If a friar or caretaker happens to be present, he will turn a light switch on and off illuminating and darkening the space inside the encasement causing what appears to be a change in the demeanor of the face. When the light is on, the man appears alert; with the light off, he appears passive and dormant.

Experts who have studied the image are unable to determine what it is composed of. Some have suggested it was made from sea byssus, or sea silk (Italian: bisso marino). Others are baffled by the way the pigment was applied to the thin strands and how the image is equally visible on both sides.

Sr. Blandina Schlömer, a German Trappist nun, was visiting Manoppello in the 1970s when she made an interesting observation. While looking at the image, she had the impression she was standing in front of the veil of Veronica. While the Gospels make no reference to the story of Veronica and the veil, tradition says that Veronica encountered Jesus along the Via Dolorosa on the way to Calvary and paused to wipe the blood and sweat off his face with her veil. When she did so, his image was imprinted on the cloth.

Being familiar with the shroud of Turin, Sr. Blandina took copies of the two images and superimposed one on top of the other. She noted that there were 10 perfect points of contact. Not only did the eyes, nose, and mouth line up perfectly, so did the position of wounds.

Sometime later, a copy of the lesser known image of Christ, the sudarium or shroud of Oviedo – a bloodstained piece of cloth that could also have been applied to Christ’s body during burial – was superimposed on the Manoppello and Turin images. The face of Christ of that image matched the other two.

In the rear of the church, to the left, is a doorway leading to a large hall. There are numerous displays including studies of the Manoppello image, descriptions and large photographs of the Turin and Oviedo shrouds, an example of sea byssus, and three glass panels depicting the Manoppello, Turin, and Olviedo images. The panels are on rollers and visitors can look at them individually or slide them in front of one another to see for themselves how the faces match.

Manoppello is only about 30 miles (45 km) from Lanciano, the site of a well-known Eucharistic miracle. Both locations are about halfway between San Giovanni Rotondo, where St. Padre Pio of Pietrelcina is buried, and Loreto, site of the Holy House of Mary, making it a popular stop on pilgrimage itineraries.

In 2006, Pope Benedict XVI visited the sanctuary of Manoppello. Since then, interest in the image has surged and countless pilgrims visit the sanctuary each year. Though the Church has never issued a pronouncement on the authenticity of the supernatural aspect of the Manoppello image, Pope Benedict made the following statement during his visit:

Read more:
3D model of Christ based on Shroud of Turin on display in Venice

Read more:
Does this Italian hilltop shrine have the true relic of Veronica’s veil?