The miraculous icon of Our Lady of Sorrows in Campocavallo, Italy

Photo Courtesy of the Sanctuary of Campocavallo

In 1892, on the Feast of Corpus Christi, the icon of the Virgin Mary began to emit tears. The next day, Mary’s eyes in the icon began to move.

Campocavallo is a small hamlet in the plains in the Marches region of central Italy. Today with its population of 1500 residents, it would be unremarkable if not for an impressive sanctuary that rises majestically in the center of town. More important is the miraculous icon of the Virgin Mary conserved within.

In the late 1800s, Campocavallo boasted little more than a few occasional farmhouses in the bucolic countryside near Osimo. At its center was a crossroads linking Osimo to Recanati and Jesi to Loreto.

In one quadrant of the intersection was a country church that served to offer solace to weary travelers.

Inside the church was an oleographic image of Our Lady of Sorrows purchased by the pastor, Don Sorbellini, from a traveling merchant. There was nothing extraordinary about it the summer of 1892.

That year on June 16, the Feast of Corpus Christi, the icon of the Virgin Mary began to emit tears. The next day, Mary’s eyes in the icon began to move. These initial prodigies were witnessed by numerous witnesses. Soon people heard about it and pilgrims began flocking to Campocavallo from Italy and beyond. The prodigy continued off and on for 10 years.

A new church is built to hold the crowds

Don Sorbellini immediately began working on the construction for a large sanctuary to accommodate the crowds. Four months after the initial miracle, the foundation stone was laid. Thirteen years later, work was completed and the church was consecrated on September 21, 1905.

In 1948 the Order of the Servites of Mary, a mendicant order from Florence, began to assume administration of the sanctuary. In 1986, administration passed to the diocesan clergy of Osimo. More recently, since 2001 the Franciscans of the Friars Immaculate have been tasked with looking after the sanctuary.

The magnificent sanctuary – with its impressive dome and bell tower – can seem out of place all alone in the countryside, and is perhaps more befitting an urban setting or an important abbey or monastery.

The traditional church is in the form of a Latin cross. It is structured in three naves and divided by ten pillars and six columns.

The icon of Our Lady of the Seven Sorrows dominates the beautiful marble aedicule behind the main altar inside the apse.

Townspeople pay homage with churches made of wheat

In 1939, a unique tradition began in Campocavallo: the Festa del Covo (feast of the den). Each year in the month of August, local townspeople present a carriage carrying a large model of a church made solely of intertwined ears of wheat. The “covo” takes months to build and depicts different well-known churches or religious buildings from around the world.

The extraordinary models are magnificent works of devotion. They are a moving example of the love of the townspeople for their sanctuary and Our Lady.

Today pilgrims still come to the Campocavallo. Usually, they stop in on the way to or from the more famous sanctuary of the Holy House of Loreto just 10 kilometers (6 miles) away, or the resting place of St. Joseph of Cupertino in nearby Osimo.

PRAYER to the Blessed Virgin of Campocavallo

O Virgin of Sorrows, who have deigned to lower your holy eyes many times toward your devotees and you have raised them as if to offer their prayers to God, please kindly listen to us, O Mother of Mercy, obtain what we fervently implore … 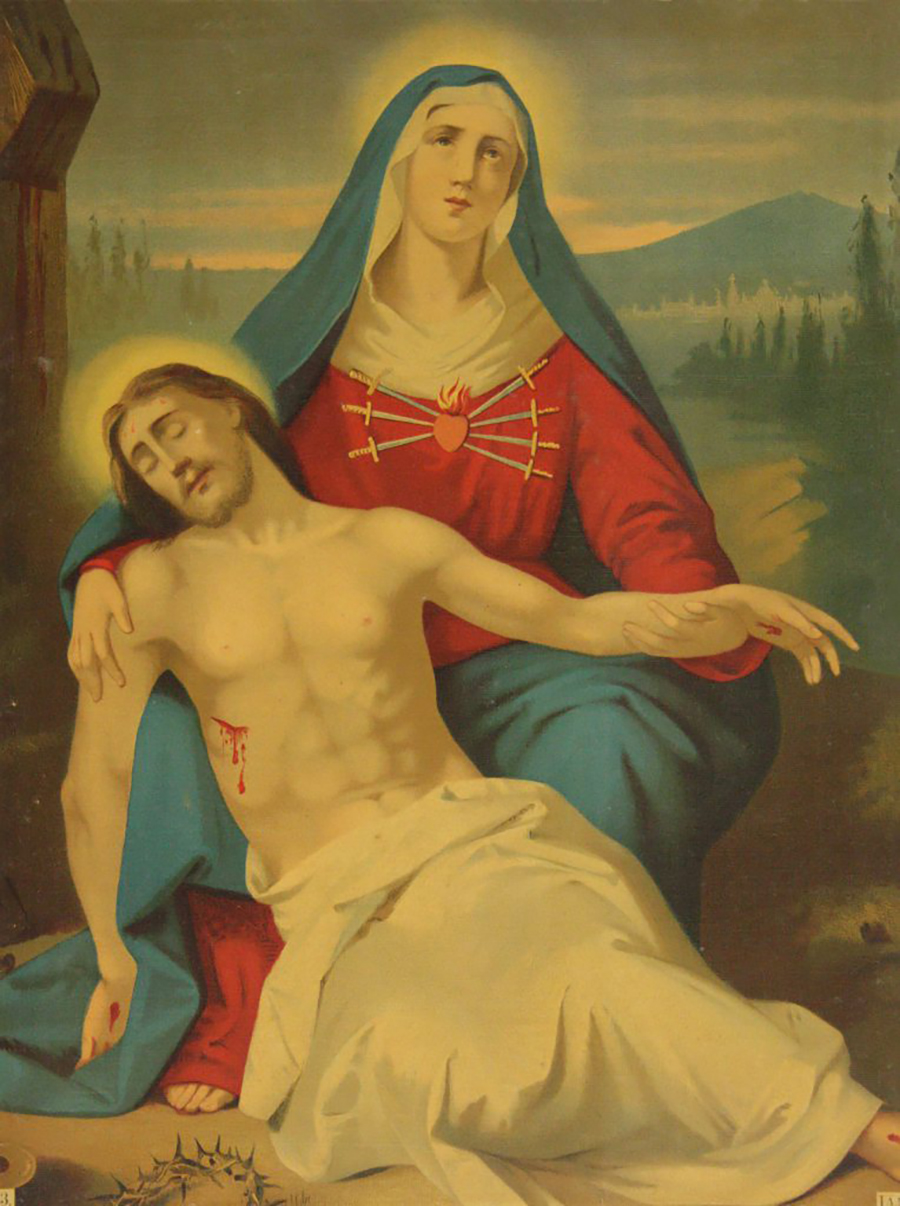