Who are the cherubim in the Bible?

These heavenly creatures are far from being the chubby, playful babies Raphael painted. They have a lot to do with the Ark of the Covenant.

Everybody is more or less familiar with the overused, almost cliched Renaissance image. Two chubby winged babies lean in at the bottom of the frame, holding their respective chins in their hands, looking at the upper frame as if they were up to something slightly mischievous. The image, which originally belonged to Raphael’s Sistine Madonna, has been used ad nauseam in almost every kind of holiday card —from Christmas to thinking-of-you cards, bows and arrows conveniently added for Valentine’s Day.

In the Bible, however, cherubs are “armed” quite differently. To put it bluntly, Raphael’s “cherubs” have nothing to do with the biblical cherubim—they are, in fact, putti or amorini: classic figures originally supposed to represent love-related passions exclusively inspired by Greek mythology. Only in Renaissance and Baroque art did these chubby male winged children came to represent God’s omnipresence — one can find them literally everywhere in a Baroque church.

So, who are the cherubim, according to the Bible, if not these fleshy figures?

As Alice Woods rightly notes in her book Of Wings and Wheels, “aside from Yahweh, the cherubim are the most frequently occurring heavenly being in the Hebrew Bible.” Interestingly, even if the word appears over 90 times in it, they are mentioned only once in the New Testament — and that, not even in the Gospels but in Paul’s letter to the Hebrews: “Above it were the cherubim of glory overshadowing the mercy seat.” (Cf. Hb 9, 5). This reference to the Mercy Seat (the kaporet, a gold lid placed atop the Ark of the Covenant) is key.

Read more:There are no “10 commandments” in the Bible

Even the origin of the word cherub itself is relatively uncertain. The word behind our use of cherub is certainly the Hebrew kerub — its original plural form being kerubim. Some scholars suggest the word comes from the Akkadian karibu, meaning “guardian” but also a kind of advocate. In any case, it would refer to someone who stands between everyday people and the authority to either grant them an audience or intercede on their behalf.

Others explain kerub derives from the Hebrew word for chariot, merkabah. Those who defend this etymology note how the word is used in the book of Ezekiel. Already in the first chapter of the book, they appear as transporting God’s throne — but, curiously enough, they are not called “cherubim” until much later, in chapter 10. In both chapters, 1 and 10, cherubim are described more or less in the same terms —and quite differently from Raphael’s lovely putti.

Ezekiel 1 opens with the prophet saying the skies opened and he had visions of God by the river Chebar. The text reads as follows:

In the middle of it [a great cloud] was something like four living creatures. This was their appearance: they were of human form. Each had four faces, and each of them had four wings. Their legs were straight, and the soles of their feet were like the sole of a calf’s foot; and they sparkled like burnished bronze.  Under their wings on their four sides they had human hands. And the four had their faces and their wings thus: their wings touched one another; each of them moved straight ahead, without turning as they moved. As for the appearance of their faces: the four had the face of a human being, the face of a lion on the right side, the face of an ox on the left side, and the face of an eagle; such were their faces. Their wings were spread out above; each creature had two wings, each of which touched the wing of another, while two covered their bodies.

Ezekiel 10 introduces slight variations in the original vision. Now cherubim either have wheels, or are themselves “wheels within wheels,” “full of eyes all round” —definitely not your chubby putti. The text reads:

I looked, and there were four wheels beside the cherubim, one beside each cherub; and the appearance of the wheels was like gleaming beryl. And as for their appearance, the four looked alike, something like a wheel within a wheel. When they moved, they moved in any of the four directions without veering as they moved; but in whatever direction the front wheel faced, the others followed without veering as they moved. Their entire body, their rims, their spokes, their wings, and the wheels—the wheels of the four of them—were full of eyes all round. As for the wheels, they were called in my hearing ‘the wheel-work’. Each one had four faces: the first face was that of the cherub, the second face was that of a human being, the third that of a lion, and the fourth that of an eagle. The cherubim rose up. These were the living creatures that I saw by the river Chebar. When the cherubim moved, the wheels moved beside them; and when the cherubim lifted up their wings to rise up from the earth, the wheels at their side did not veer. When they stopped, the others stopped, and when they rose up, the others rose up with them; for the spirit of the living creatures was in them.

Clearly, these biblical cherubim are way more menacing than Raphael’s darling children. It is no surprise then that it was one of these cherubim who was in charge of preventing Adam and Eve from trying to sneak back into the Garden of Eden once expelled from it; or that God commanded Moses and Aaron to make images of cherubim around the Ark of the Covenant. In fact, the cherubim around the Ark seem to fit perfectly well with what the Akkadian “karibu” suggests: they guard and mediate.

Fierce as they clearly are, the images of the cherubim had a dual mission in the Temple. On the one hand, they were guardians of the most sacred — the Ark itself. But on the other, they were an integral part of the kaporet (Cf. Ex 25, 19), the Mercy Seat. The outspread wings of the cherubim covering the kaporet were themselves part of the invisible throne of God in the Tabernacle. This seems to suggest they would somewhat intercede on behalf of those presenting their offerings in the Temple of Jerusalem—what you would expect from your karibu, indeed.

Make sure to visit the slideshow below to discover why the authors of the Gospels came to be associated with the different faces of these cherubim— ox, lion, eagle, and a human face. 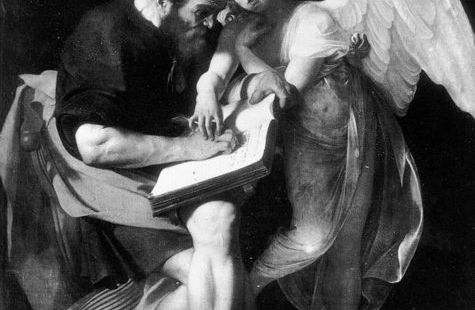 Prayer for this evening
Top 10
1
Philip Kosloski
This morning prayer is easy to memorize
2
Cerith Gardiner
8 Powerful quotes from Nightbirde that will fill you with hope
3
Daniel Esparza
5 Curious things you might not know about Catholicism
4
Philip Kosloski
Why is Latin the official language of the Church, instead of Aram...
5
Daniel Esparza
3 Legendary pilgrimages off the beaten path
6
Daniel Esparza
Who are the cherubim in the Bible?
7
Zelda Caldwell
Did Jesus wear “tefillin” as some observant Jews do t...
See More
Newsletter
Get Aleteia delivered to your inbox. Subscribe here.